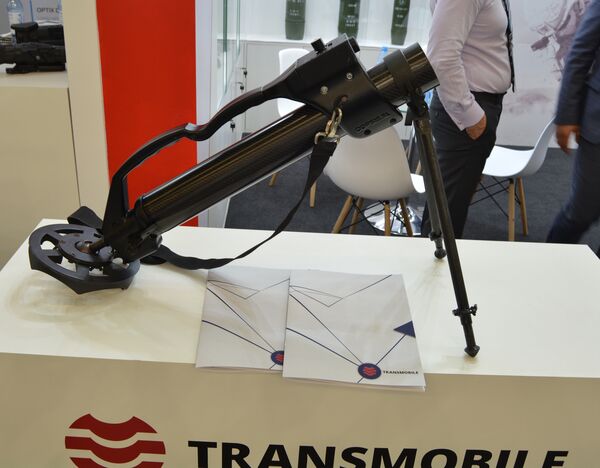 Sofia, Bulgaria-based Transmobile has developed what the company describes as a “niversal silent system” for launching mines and grenades.

The company's COPSIS SL is not the only ‘silent' system of this type available, with examples including the FLY-K MkII and 2B25 82 mm mortars. However, the COPSIS SL differs in that it uses the RPG-7 series of projectiles modified for firing from the specially developed spigot launcher.

Transmobile displayed the COPSIS SL at Eurosatory 2022 in Paris, but did not disclose how it functions. However, it is believed to be based on the ‘captive-piston' system. Upon firing, an encapsulated piston impacts and transfers energy to the projectile, and all propellant gases and derived smoke and noise are retained internally making the launch signature effectively ‘silent'.

The launcher is of lightweight construction with a non-metal body, a small circular baseplate, and a bipod fitted at the forward or muzzle end. A full-length carrying handle can be fitted, along with either manually adjusted sighting systems or a small digital aiming device. Inside the body is a projecting-spigot about 200 mm in length, over which is placed a specially modified RPG-7 round.

The modification consists of replacing the standard expelling charge of the conventional round with a propriety fitting that is placed over the internal spigot, and the length of the spigot holding the projectile is parallel to the bore. Upon firing, the rear-fins extend as normal and impart a slow rotational spin to stabilise the projectile. It was not divulged how the projectile was armed on launch, but a maximum range of 850 m is claimed and a ‘direct-fire' range of 180 m using a tripod system.

Sofia, Bulgaria-based Transmobile has developed what the company describes as a “niversal silent sys...