Three Sri Lanka Air Force (SLAF) Antonov An-32B transport aircraft have returned to operational service with the No 2 Heavy Transport Squadron at Katunayake airbase after being overhauled in Ukraine. 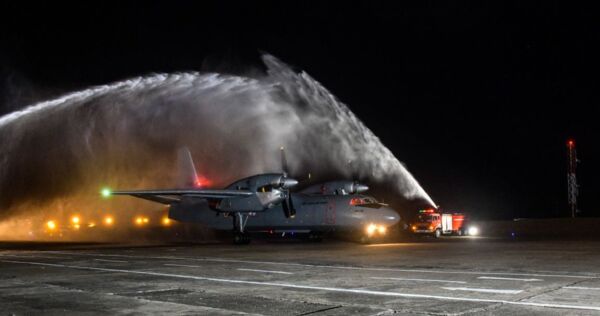 One of three SLAF AN-32B transport aircraft that returned to service with No 2 Squadron at SLAF Base Katunayake on 11 June, after being overhauled in Ukraine. (Sri Lanka Air Force)

The aircraft – bearing tail numbers SCM 860, SCM 863, and SCM 869 – had departed for Ukraine in August 2020 and returned to Sri Lanka on 11 June, after a five-day journey, said SLAF in a statement issued the following day.

The decision to overhaul the three platforms, which were acquired in 1995 but had been grounded for several years, was made by the Sri Lankan government in early January 2020, with SLAF Commander Air Marshal Sudarshana Pathirana telling Janes that the overhaul project was valued at USD7.5 million.

The An-32Bs are the largest operational transport aircraft in SLAF service. The commander said that plans to overhaul the service's fourth and final platform of the type are expected to be finalised soon.

The SLAF is also evaluating proposals to overhaul its two C-130K transports, both of which have been grounded for years, noted the commander.

The SLAF stated that the An-32Bs played a vital role during the country's civil war, which ended in 2009, by transporting “military personnel, civilians, wounded personnel, essential goods, and munitions to and from the Northern and Eastern Theatres”.