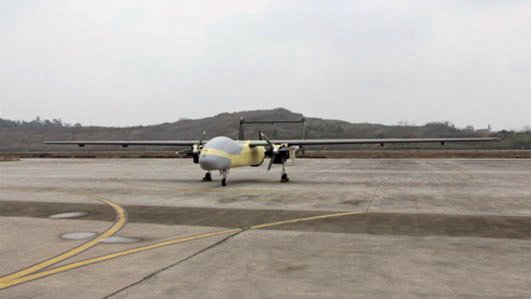 The new three-engined variant of the TW328/TB001 conducted its maiden flight on 16 January. (Tengden via National Business Daily )

The new variant took to the skies from an airfield in south-western China – presumably the Zigong Fengming General Airport in Sichuan – on 16 January, reported the state-owned Global Times newspaper, quoting unnamed experts as saying that the platform, which is possibly the first medium-altitude, long-endurance (MALE) UAV of its class to use three engines, can be used for both “transport and attack missions”.

The designation of the new variant, which unlike the TW328/TB001 ‘Twin Tailed Scorpion’ UAV has an additional third piston engine on its tail, was not revealed. However, Global Times quoted the Chengdu Daily newspaper as saying that the platform has a flight ceiling of 9,500 m, a maximum climb rate of 10 m/s, and a top speed of more than 300 km/h, adding that it is “very adaptable and can be deployed in airfields in plateau areas”.

It also said the platform, which has an overall wingspan of 20 m and is 11 m long, has a maximum take-off weight of 3.2 tonnes and an endurance of 35 hours.

Quoting the chinanews.com website, Global Times reported that the UAV, which can also be used in areas such as disaster relief, forest firefighting, geographic mapping, meteorological observation, and aerial communications relay will be “put into market in all fronts” in 2021.

Images have emerged of a three-engined variant of the Sichuan Tengden Technology Company (also spell...