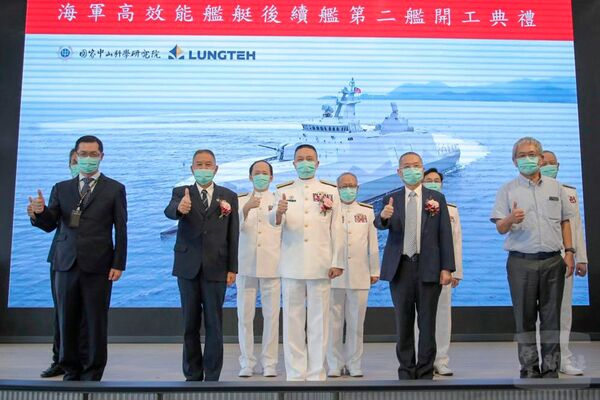 Taiwanese officials and navy personnel held a ceremony on 6 October at Lungteh Shipbuilding's facilities in Suao to mark the start of construction of the second improved Tuo Chiang-class fast missile corvette for the RoCN. (Taiwan's Military News Agency)

A steel-cutting ceremony for the vessel was held on 6 October at the company's facilities in Suao, Yilan County, Taiwan's Military News Agency (MNA) reported that same day, while confirming that this is the second of six corvettes of the improved variant set to be built by 2023. According to Taiwanese media reports, up to five more of these corvettes are expected to follow.

Ta Chiang (pennant number 619), the first series-produced vessel of the improved variant, entered service with the RoCN in a ceremony held on 9 September at the Suao Naval Base that was also attended by Taiwanese President Tsai Ing-wen.

The new ships are intended to be deployed on the low-intensity maritime security missions that are currently undertaken by the RoCN's larger and more expensive destroyers and frigates, while providing an affordable, asymmetrical solution against an adversary's amphibious landing and other large ships in the case of a conflict.

The vessels of the improved variant feature several enhancements over first-of-class Tuo Chiang – which was commissioned in late 2014 – in weaponry, mission systems, and design.