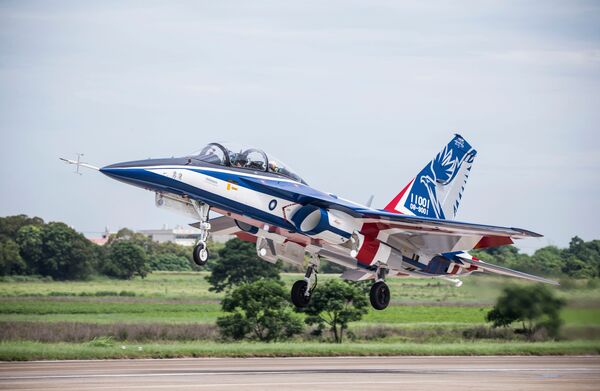 The first T-5 prototype aircraft conducting its maiden flight in June 2020. The first-production aircraft of the series was delivered to the RoCAF on 28 November 2021. (Taiwanese Ministry of National Defence)

According to a Facebook post on the RoCAF's official account, the twin-engine aircraft took off from the Ching Chuan Kang Air Base in Taichung, where AIDC's facilities are located, at 9:00 am local time and landed at Zhihang Air Base in Taitung, where a formal handover ceremony was held, at 10:35 am.

The T-5, with serial number '11003', is the first-production aircraft and the third one to be handed over to the RoCAF. The fourth aircraft – the second-production unit – is scheduled for delivery by the end of 2021, according to a report presented in September by the Taiwanese Ministry of National Defense to the Legislative Yuan (Taiwan's Parliament). These two aircraft will be used for additional testing by the RoCAF.

The RoCAF started operational testing and evaluation of the initial two T-5 prototypes in March 2021. The first prototype, which was developed in collaboration with the National Chung-Shan Institute of Science and Technology, conducted its first flight in June 2020, while the second flew in late December 2020.

The RoCAF is expected to acquire 66 of the twin-seat T-5 under a TWD68.6 billion (USD2.2 billion) contract awarded to AIDC in 2017. The aircraft is intended to replace the service's ageing AIDC AT-3 trainers and Northrop F-5E/F Tiger II combat/trainer aircraft by 2026.

On 28 November the Republic of China Air Force (RoCAF) received the first mass-produced Aerospace In...

The launch and recovery system (LARS) developed for the Belgium/Netherlands (BE/NL) replacement mine...
Request Consultation