Taiwan has officially begun construction of the first of a planned eight locally designed and developed diesel-electric attack submarines (SSKs) for the Republic of China Navy (RoCN) as the island aims to enhance its defence capabilities amid rising tensions with mainland China. 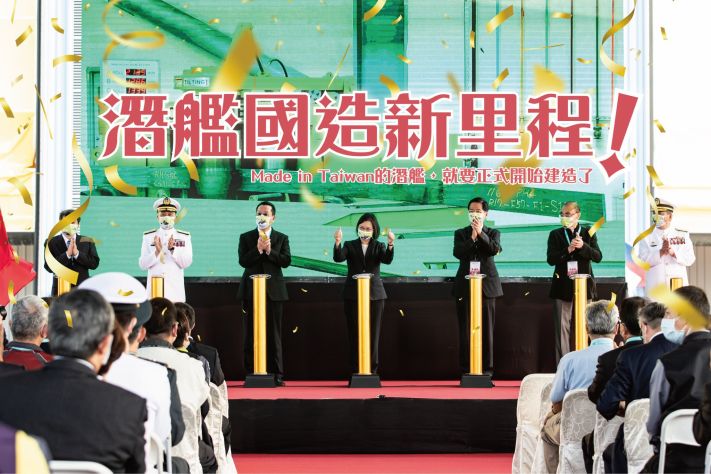 On 24 November Taiwan marked the start of construction of its first indigenous submarine in a ceremony held at the southern port city of Kaohsiung. (Taiwanese MND )

During a 24 November ceremony to mark the event at the southern port city of Kaohsiung Taiwanese President Tsai Ing-wen referred to the beginning of the construction project as a “milestone” for Taiwan’s defence industry, noting that it also demonstrates the island’s strong will “to protect its sovereignty”.

“Submarines are important equipment for the development of the Taiwanese navy’s asymmetric warfare capabilities and to deter enemy ships from encircling Taiwan,” Tsai was quoted by the Reuters news agency as saying.

The island’s largest shipbuilder, CSBC Corporation (formerly the China Shipbuilding Corporation), will construct the boats at a purpose-built facility in Kaohsiung that only recently became operational.

According to the shipbuilder, which is partly owned by the state, the first boat is slated for completion in the third quarter of 2024, with sea trials and commissioning scheduled for 2025. The boats will be built under the Indigenous Defence Submarine Programme, also known as the Hai Ch’ang programme.

As Janes reported, CSBC Corporation – and its development partner, the National Chung-Shan Institute of Science and Technology (CSIST) – were awarded a contract in 2017 to design and construct the submarines. The project is supported by a submarine development centre that CSBC inaugurated in 2016.

Taiwan has officially begun construction of the first of a planned eight locally designed and develo...