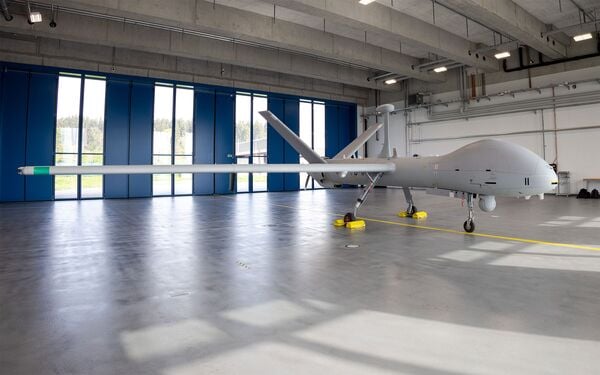 The first of two Hermes 900 UAVs received by Switzerland has been assembled ahead of flight trials and handover to the air force later in the year. (VBS)

The Swiss Federal Department of Defence, Civil Protection, and Sport (VBS) announced the milestone on 29 April, noting that the two UAVs and two ground control stations (GCSs) arrived in Emmen in two deliveries on 21 and 26 April, respectively.

“The [UAVs and GCSs] were transported from Israel to Switzerland by sea and land. Another component of the deliveries was various material for the maintenance and the subassemblies, which are necessary for the operation of the ADS 15,“ the VBS said.

As noted by the VBS, the first aircraft (serial D-11) has been assembled, while work on the second (D-14) will begin shortly. A flight trials campaign will be launched at Emmen Airport in mid-2022, ahead of handover to the Swiss Air Force later in the year. All six UAVs will be with the air force by the end of 2023.

Elbit Systems was awarded a contract worth approximately USD200 million by the Swiss government for the procurement of its Hermes 900 UAV in November 2015. The initial ADS 15 requirement contract placed by the VBS covered six Hermes 900 UAVs, although the wider requirement is for 15 such vehicles to be used for border surveillance and disaster relief.