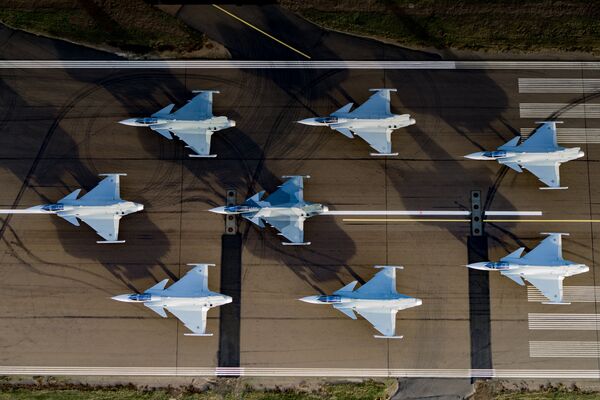 To mark the onset of serial production deliveries, Saab flew an eight-ship formation of test and serial Gripen Es for both Sweden and Brazil. (Saab)

The milestone, which coincided with the beginning of serial production deliveries to Brazil, saw the SwAF receive the first two of a planned 60 Gripen Es.

These first aircraft are to be assigned to Skaraborg Wing (F7), located at Satenas in the southwest of Sweden. As well as equipping this wing, remaining deliveries will see aircraft go to Blekinge Wing (F17) at Ronneby, in the far south of Sweden, and Norrbotten Wing (F21), also in the south of the country. A fourth wing, Uppsala Wing (F16), also located in southern Sweden, will be stood up from 2022. Each wing is to be equipped with two squadrons.

As previously highlighted by Saab, the Gripen E's enhancements over the earlier C/D models can be categorised in terms of survivability, sensors, general systems, payload, communications, performance, range, avionics, and human-machine interface/sensor fusion.