The first prototype of SubSea Craft's innovative Victa-class diver delivery unit (DDU) will enter the water for the first time on 9 September.

Initial testing of the vessel is being conducted adjacent to the company's headquarters in Portsmouth, Hampshire, and focused on checking the vessel's equilibrium: a key first stage given that, unlike other diver insertion boats, the Victa concept combines a fast surface craft and a submersible within the same platform. The vessel can therefore approach its target at speed from offshore before submerging – an automated process in which the cabin is flooded – to effect the stealthy insertion of up to six divers seated behind a crew of two.

As the trials campaign moves forward the vessel will be tested in the waters around Gosport, Hampshire, and will then be moved to SubSea Craft's Trials, Testing, and Training (T3) facility at Portland in Dorset. 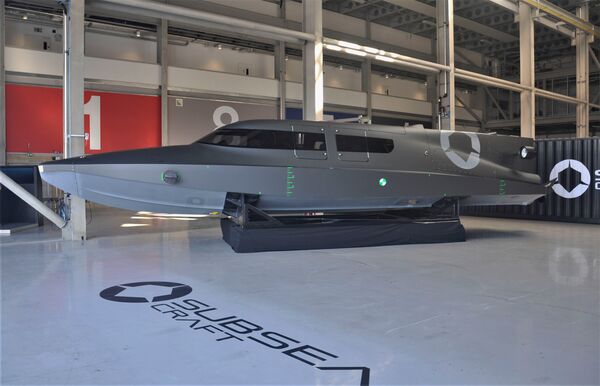 The first prototype of SubSea Craft's innovative Victa-class diver delivery unit, photographed two days before it was scheduled to enter the water for the first time on 9 September. (Janes/P Felstead)

The Victa prototype, which uses a monohull designed by UK naval architects BAR Technologies, is known as ‘002', as it follows an initial catamaran testbed, ‘001', that was used to prove out the automated balance and trim technology employed by SubSea Craft. Work on the current vessel began in 2018.