Srboauto’s V3S5 makes 72 improvements, many of them minor, to extend the original VS3 vehicle’s operational life and bring it up to NATO standards, according to the company.

The upgrade was developed to meet Serbian armed forces requirements. Milan Banjac, who works in Srboauto’s sales promotion department, said the company expects “a production contract after the prototype tests have been carried out”.

The former Yugoslav People’s Army (JNA) purchased a significant number of then-Czechoslovakian M53/59 twin 30 mm SPAAGs that were widely used in a direct fire ground support role. The actual platform is based on the Praga V3S 6×6 3,000 kg cross-country truck chassis, which first entered production in 1952.

Mounted on the rear of the legacy platform is a power operated turret armed with two 30 mm gas-operated cannons, which fire 30×210 mm ammunition that is still manufactured in Serbia. Each cannon is provided with 50 rounds of ready-use ammunition in a vertical magazine. Turret traverse is powered through 360°, with weapon elevation also powered from -10° to 85°. 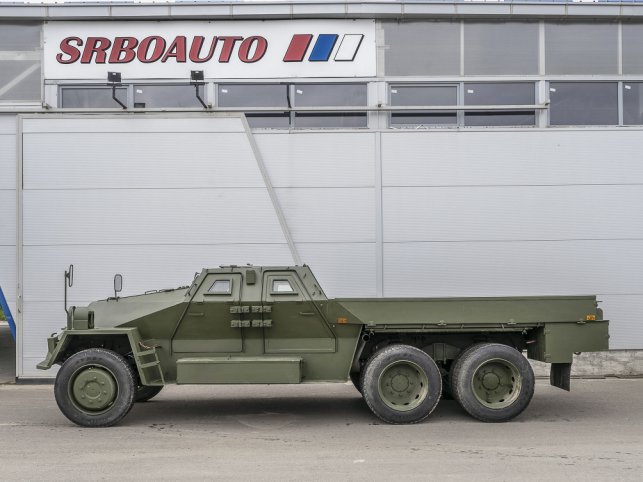 The upgraded Praga VS35, showing the new four-door protected cab. The flatbed’s sides fold down to fit the twin 30 mm weapons. (Srboauto)

Externally, the most significant improvement in the new VS35 is replacement of the original two-door protected crew cab with a new four-door cab that is fully armoured to NATO STANAG 4569 Level 2 standard. The fully enclosed cab is fitted with bullet/splinter proof windows to the front and sides. An Ebersspreher 8kW heater is installed in the crew compartment.