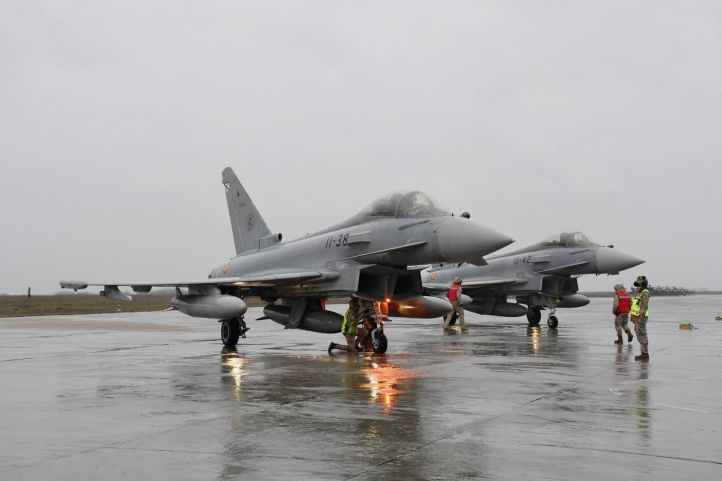 Spanish Eurofighters arrive at Mihail Koglaniceanu Air Base, Romania, on 25 January. They will fly through to the end of March in support of NATO’s Southern Air Policing mission. NATO Allied Air Command.

Six EdAE Eurofighters and 130 personnel arrived at the base on Romania’s Black Sea coast, from where they will perform NATO’s Southern Air Policing mission through to the end of March.

“This is the first time that Spain has sent [its] fighters to the southeast of NATO’s territory to support the alliance’s deterrence and defence measures,” NATO’s Allied Air Command said.

The Southern Air Policing mission, which includes Bulgarian airspace also, is part of NATO’s Enhanced Air Policing (EAP) mission that was introduced in 2015 in the wake of Russia’s invasion and annexation of Crimea and its military activities in eastern Ukraine. Further to this particular mission, NATO conducts EAP missions in Albania; the Baltic states of Estonia, Latvia, and Lithuania; Iceland; Slovenia; and the BENELUX nations of Belgium, Luxembourg, and the Netherlands.