Hanjin Heavy Industries and Construction (HHIC) – one of South Korea’s most prominent naval shipbuilders – has announced that the state-owned Korea Development Bank (KDB), its main creditor and largest shareholder, is looking to sell its stake in the company.

HHIC, based in Busan, said in a filing to the South Korean stock exchange on 29 September that the KDB has invited bidders to acquire all or part of its 83.45% stake in HHIC, with the aim to finalise a preliminary bidding phase by the end of October.

The stake in its entirety is expected to be worth around USD430 million. 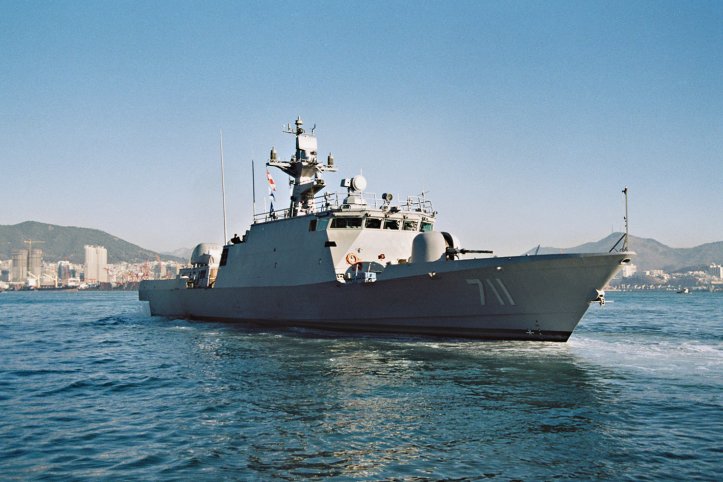 South Korean naval shipbuilder HHIC– constructor of the PKX-B-class fast attack craft – has confirmed that its largest shareholder is looking to sell its stake in the company. (HHIC)

In a separate statement, the KDB said it plans to sell at least 63.44% of its shareholding in HHIC and to decide on whether to divest the remaining stake before the end of final bidding. It added that its shareholding in HHIC is split across several financial institutions including the KDB itself. Institutions in the Philippines are also shareholders in the company, said the KDB.

HHIC has been facing severe economic pressure for several years: a result mainly of a downturn in sales in commercial shipbuilding and construction sectors.

In fiscal year 2018, the company’s sales increased year-on-year by 3% to KRW1.69 trillion (USD1.44 billion). However, HHIC’s losses expanded from KRW278 billion in 2017 to KRW1.32 trillion in 2018. While no HHIC sales figures for the defence sector are available, these are expected to have remained relatively strong.

South African armoured vehicle designer and manufacturer OTT has acquired LMT, which has been in bus...