According to the MND, between two and three complete systems comprising a total of about 10 Mid-Altitude UAVs (MUAVs) and associated ground support equipment will be introduced to boost the RoKA’s long-range airborne surveillance capabilities. 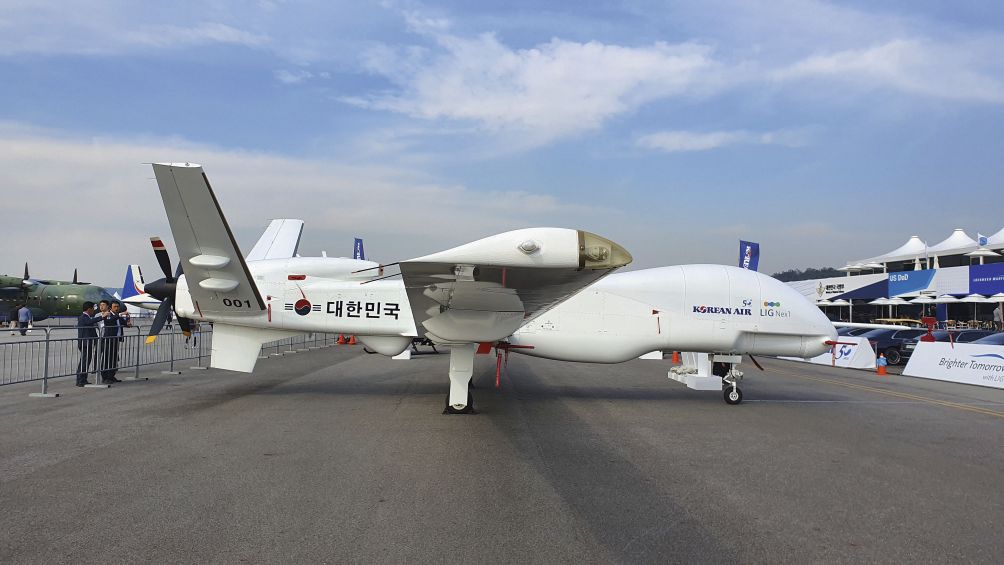 KAL’s KUS-FS prototype was unveiled to the public at the ADEX 2019 exhibition. The type has been selected to be the future Mid-Altitude UAV for the South Korean air force and army. (Dae Young Kim)

The MUAV is based the Korean Air Aerospace Division (KAL-ASD)’s KUS-FS medium-altitude, long-endurance (MALE) UAV design and is being developed for the RoK Air Force (RoKAF) at a cost of KRW488.4 billion (USD402.7 million) under the supervision of the MND’s Agency for Defense Development (ADD).

According to official specifications released by KAL-ASD, the baseline KUS-FS design has a length of 13 m and a wingspan of 25 m. The company declined to provide details of its performance but the air vehicle is understood to be powered by a 1,200hp turboprop engine that enables it to reach a service ceiling of 13,000 m (42,650 ft) and stay aloft for periods in excess of 24 hours.

KAL-ASD is responsible for the MUAV programme’s platform development and production, while Hanwha Corporation is developing its electro-optical/infrared (EO/IR) system. LIG Nex1 is developing a new synthetic aperture radar (SAR) and is also partnering with KAL-ASD on the air vehicle’s avionics systems.

According a KAL-ASD official, the MUAV was able to accurately identify a specific seat within the Seoul Sports Complex from a distance of about 130 km.

The South Korean Minstry of National Defense (MND) is planning to procure a new reconnaissance unman...