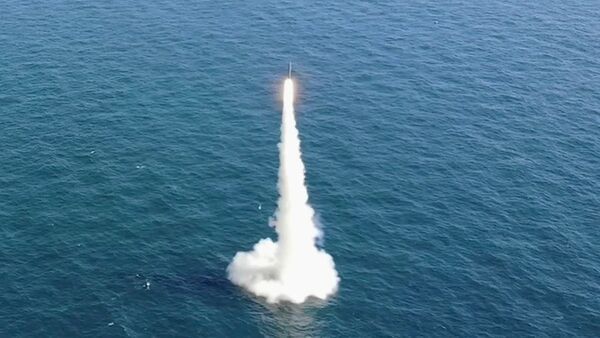 South Korea test-launched a locally developed SLBM from an in-service submarine for the first time on 15 September. (Agency for Defense Development)

South Korea has test-launched a locally developed submarine-launched ballistic missile (SLBM) from an in-service submarine for the first time, according to a 15 September statement by the Ministry of National Defense (MND) in Seoul.

The MND said that the weapon, which was launched from the recently commissioned KSS-III (also spelled KSS-3)-class submarine Dosan An Chang-ho while submerged, “accurately hit” its intended simulated target, addiing that this makes South Korea one of the few countries in the world to have SLBMs.

The launch, which follows underwater ejection tests from the same boat, as well as trials using an underwater barrage, was conducted by the country's Agency for Defence Development (ADD) at its Anheung test site in South Chungcheong Province and overseen by South Korean President Moon Jae-in and Defence Minister Suh Wook.

In a separate statement Moon said that South Korea's continuous improvement of its locally developed missiles will serve as a deterrent against future provocations from North Korea and help overcome asymmetric threats.

The Yonhap News Agency quoted unnamed military sources as saying on 7 September that series-production of the SLBM, which has reportedly been codenamed ‘Hyeonmu 4-4' (also spelled ‘Hyunmoo 4-4'), would begin once a series of additional tests had been completed.

Yonhap also reported that the SLBM is believed to be a variant of South Korea's 500 km-range Hyeonmu-2B (also spelled Hyunmoo-2B) ballistic missile and would be fitted with a conventional warhead.

The Republic of Korea Navy (RoKN) commissioned Dosan An Chang-ho

South Korea has test-launched a locally developed submarine-launched ballistic missile (SLBM) from a...