Rob Topping, company CEO, told Janes on 17 May during the annual Special Operations Forces Industry Conference (SOFIC) that Hoverfly demonstrated the UAV at the Naval Integration in Contested Environments (NICE) Advanced Naval Technology Exercise (ANTX) 2021. This was held on 5–16 April at US Marine Corps (USMC) Base Camp Lejeune in North Carolina. 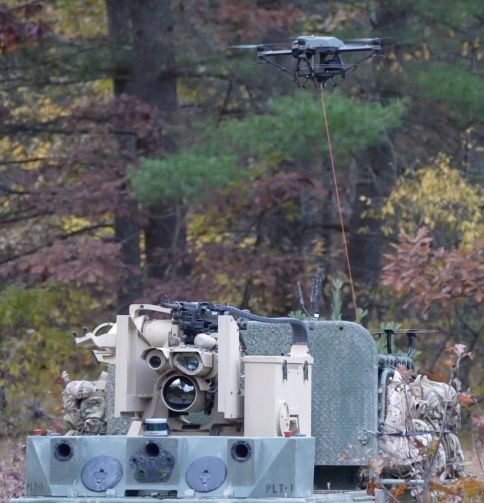 The Hoverfly LiveSky 6205 Group 1 tethered UAV recently operated at ANTX, a major US Navy exercise. Hoverfly is promoting the aircraft for use by special operations forces. (Leonardo DRS Land Systems)

At ANTX, Hoverfly had the LiveSky 6205 tethered to a maritime vessel and on the move at reasonable speeds. The aircraft, Topping said, was looking, hunting, and communicating in both a directional and an omnidirectional fashion.

ANTX events are hosted by Naval Warfare Centers to demonstrate emerging technologies and innovations that address USN and USMC mission priorities and gaps. They provide an environment for operators to assess the operational utility of technological innovations.

Hoverfly is promoting the LiveSky 6205 for use by US special operations forces (SOFs). Topping said the aircraft can perform intelligence, surveillance, and reconnaissance (ISR) overwatch and long-range communications-relay missions.

The LiveSky 6205 is available to potential Pentagon customers through the Defense Logistics Agency (DLA)-Tailored Logistics Support Program (TLSP). It will soon be available through the General Services Administration (GSA).