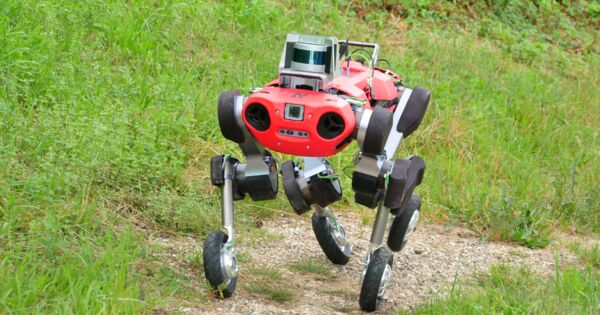 Swiss Drone and Robotics Centre are experimenting with robotic systems that combine both wheeled and legged locomotion. (ETH Zurich)

The Swiss Drone and Robotics Centre (SDRZ) are experimenting with robotic quadrupeds that combine both wheeled and legged locomotion, Mark Höpflinger, Head of the SDRZ told Janes at the SMi Military Robotics and Autonomous Systems 2022 (SMi MRAS 2022) conference, in London.

An initial trial held in 2019 discovered that the system was slow and ineffective, even on flat terrain, Höpflinger explained.

The locomotion concept was further developed, and in 2021, a research demonstrator discovered that the system was able to drive up to 40 km/h and had the capability to walk on rough terrain or stairs.

SDRZ is also working with the Swiss Federal Institute of Technology to increase the payload capability to 60 kg, Höpflinger noted.

The SDRZ also transferred the technology from the quadruped to a spider excavator, dubbed the ‘Articulated Robotic Manipulator for Numerous Operations' (ARMANO) – co-developed by SDRZ and Swiss research university ETH Zurich.

The ARMANO project is a robotic construction vehicle integrated with both wheels and legs that is capable of climbing objects more than two meters high, Höpflinger noted.

In January 2020 ARMANO was deployed on a remote-controlled basis to excavate a 95-metre-long ditch in Mitholz, Switzerland, which is an ammunition-contaminated depot.

Höpflinger said that the next stage of the ARMANO programme would be to design a tool that would enable the excavator to handle explosive devices.