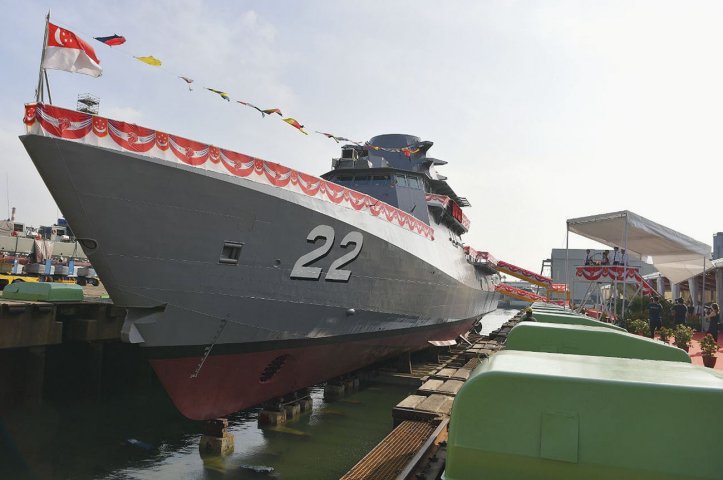 The launch ceremony of the Republic of Singapore Navy's eighth and final Littoral Mission Vessel, Fearless. (Singapore Ministry of Defence)

The ship, which will be in service as RSS Fearless (22) once commissioned, was launched on 26 January at ST Engineering’s shipyard in Benoi, Singapore.

Fearless is part of a contract signed between ST Engineering and the Singapore Ministry of Defence in 2013. The programme seeks to replace the RSN’s class of 12 55 m Fearless-class patrol vessels with eight corvette-sized LMVs.

The LMV has an overall length of 80 m, an overall beam of 12 m, and a hull draught of 3 m. It displaces 1,250 tonnes at full load, can accommodate a baseline crew of 23 including five officers, and embark a medium-lift helicopter on its flight deck.

Although the LMV platform has been designed to embark a medium-lift helicopter on the flight deck, only lead ship Independence and the last three ships in the class, Fortitude (20), Dauntless (21), and Fearless

The launch ceremony of the Republic of Singapore Navy's eighth and final Littoral Mission...

The eighth and final Independence-class Littoral Mission Vessel (LMV) on order for the Republic of S...

With the signing of the declaration of best offer between the Brazilian Navy and consortium Águas Az...