According to the Ministry of Defence (MINDEF), the V15 mini-UAV is the first indigenous hybrid fixed-wing VTOL platform jointly developed by the army, Defence Science and Technology Agency (DSTA), DSO National Laboratories, as well as local defence and engineering prime ST Engineering.

“[The V15] will replace the Skyblade III mini-UAV as the [army's] next-generation mini-UAV to meet [its] tactical intelligence, surveillance, and reconnaissance [ISR] requirements,” MINDEF stated. The Skyblade III was developed from 2007 and served as the service's primary airborne battlefield ISR asset from about late 2009. 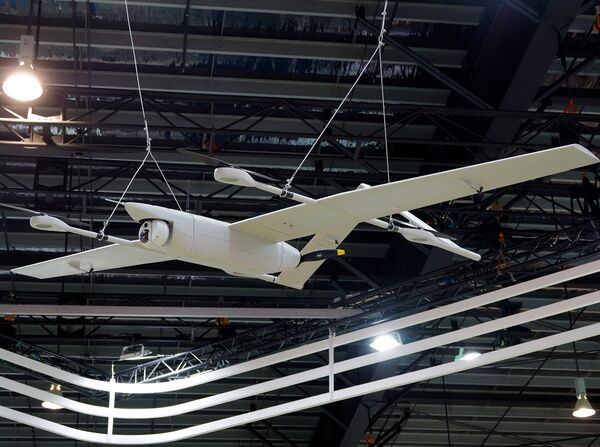 MINDEF also highlighted that the V15 mini-UAV – which has a maximum take-off weight (MTOW) of 17.5 kg and a wingspan of 3.7 m – is equipped with an undernose electro-optical/infrared (EO/IR) payload that can provide high-resolution imagery for day and night operations in “combat environments”. Flight operations will be typically conducted at tactical altitudes between 300–2,000 ft (91–610 m) above mean sea level (AMSL).

The air vehicle offers a line-of-sight datalink radius of 15 km from its ground control station (GCS) and flight time of 3 hours, translating into an 87% increase in range and endurance over the Skyblade III system. Likewise, the new system can be transported and operated by two personnel, with assembly and flight preparation requiring up to 10 minutes.