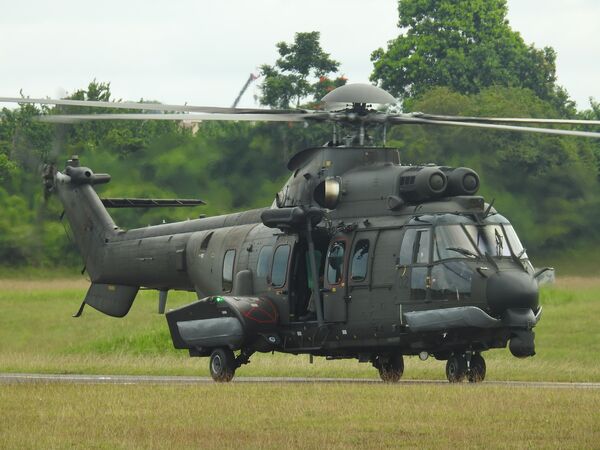 A Republic of Singapore Air Force H225M helicopter on the taxiway at Sembawang Air Base. (Janes/Ridzwan Rahmat)

The Republic of Singapore Air Force (RSAF) has expanded the range of rotary-wing operations it can undertake as the service begins to phase-in its new H225M medium-lift helicopters.

The aircraft type was ordered by Singapore's Ministry of Defence (MINDEF) under a contract signed with Airbus Helicopters in 2016 to replace the RSAF's ageing fleet of AS332M Super Pumas, which have been in service since 1983.

Delivery of the first H225M took place in March 2021. Since then, the RSAF has taken delivery of at least three more airframes, as noted by Janes during a media event at Sembawang Air Base on 11 February. The event was held in the run-up to Singapore Airshow 2022, which is to be held from 15 to 18 February at the Changi Exhibition Centre.

“When compared to the Super Pumas, the H225M has a longer range, better flying endurance, and an improved payload capacity. The navigation, communication, and auto-pilot systems are also more advanced when compared to the previous model,” said Captain Aruno Segaran, a H225M pilot from the RSAF's 125 Squadron, at the 11 February event.

Further information provided by MINDEF lists the H225M's top speed as 175 kt, maximum take-off weight as 11,200 kg, and maximum range as more than 400 n miles. The aircraft can accommodate more than 20 personnel including 11 evacuees on stretchers, and can carry up to 4,750 kg of underslung cargo.

And the aircraft has been equipped with electro-optic and infrared (EO/IR) sensors, a personnel locator system, a weather radar, an integrated electronic warfare suite, and a satellite communication (satcom) system, the ministry added.

However, images taken by

The Republic of Singapore Air Force (RSAF) has expanded the range of rotary-wing operations it can u...