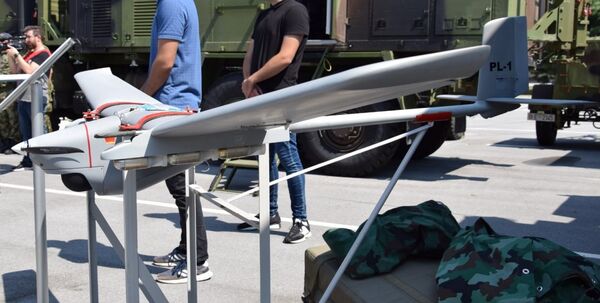 The armed version of the Vrabac UAV displayed at the Military Academy in Belgrade was shown fitted with three grenades under each wing. (Igor Bozinovski)

A prototype armed version of the Vrabac (Sparrow) small unmanned aerial vehicle (UAV) was unveiled during a display of domestic defence equipment held by the Serbian Armed Forces at the Military Academy in Belgrade.

Speaking at the event on 15 August, Nenad Miloradović, assistant minister of defence for material resources in the Serbian Ministry of Defence (MoD), told attendees that the armed Vrabac can carry up to six grenades that have an effective range of five metres, and a delayed-action fuze that triggers once the grenade rebounds to a height of 1.5 m after initial impact.

According to Miloradović, the development of the armed Vrabac is being led by the MoD's Military Technical Institute (Vojnotehnički Institut).

The standard Vrabac UAV is designed to act as an intelligence, surveillance, and reconnaissance (ISR) asset, and carries an electro-optical payload under its nose. The UAV has entered serial production and service with the Serbian Armed Forces, initially with special forces units. The primary users of the Vrabac are the 72nd Special Operations Brigade and the 63rd Parachute Brigade.