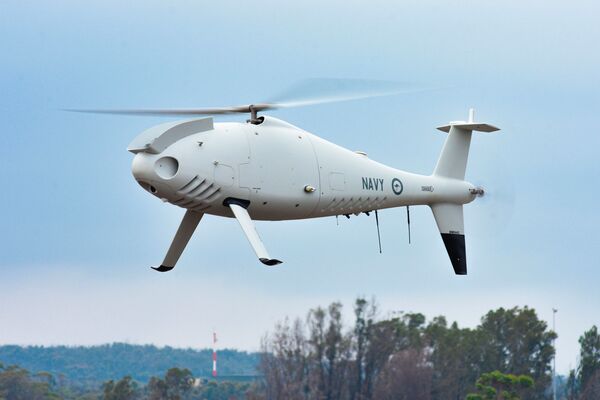 The Royal Australian Navy (RAN) has selected Schiebel's Camcopter S-100 rotary-wing UAV for Block One of its Sea 129 Phase 5 project. The RAN has already operated the S-100 (pictured) since 2018. (Schiebel )

The Australian Department of Defence (DoD) has selected Schiebel's S-100 Camcopter for an initial phase of the Royal Australian Navy's (RAN's) programme to acquire a maritime unmanned aircraft system (MUAS), a ministerial spokesperson confirmed to Janes on 3 May.

The number of S-100s under consideration for the first block has not been disclosed, although an unconfirmed media report referred to an initial procurement of 40.

Proposed by Raytheon Australia and its partner Schiebel Pacific, the S-100 was chosen without an open tender from five shortlisted contenders for single-source consideration in a move that would advance initial operating capability (IOC) by 18 months, the ministerial spokesperson said.

Although the anticipated IOC date was not disclosed, sources pointed out that prior to contract signature the Raytheon-Schiebel proposal must now undergo a full single-source procurement evaluation to ensure it meets all requirements and provides value for money. This could take six months.

The four unsuccessful contenders were Insitu Pacific, offering its Scan Eagle/Integrator family; Northrop Grumman, teaming with Leonardo with the AWHero; Textron with the Aerosonde V4/HQ system; and BAE Systems with an undisclosed air vehicle.

Block One of Sea 129 Phase 5 is the first part of a 30-year continuous improvement programme, with five-year rolling block upgrades that will incorporate new technology.

The Australian Department of Defence (DoD) has selected Schiebel's S-100 Camcopter for an initial ph...