Saudi Arabia hosted the military chiefs of staff from the five other Gulf Cooperation Council (GCC) states and several friendly countries on 21 October to talk about how to defend the region from Iranian aggression, the Saudi Ministry of Defence (MoD) announced on the same day. 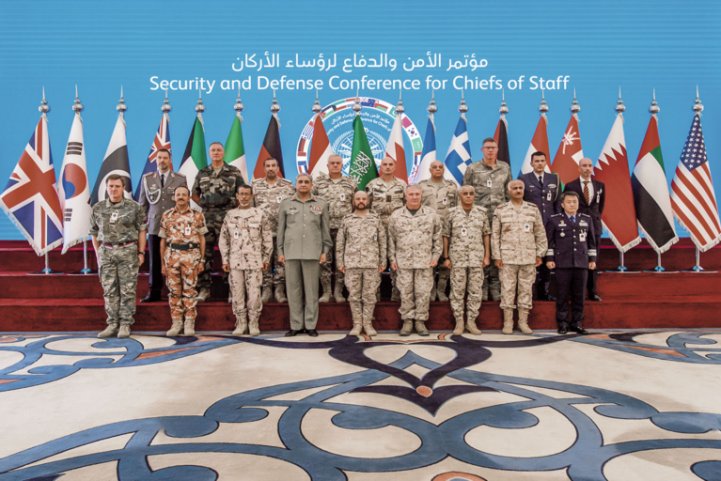 The chiefs of staff from the six Gulf Cooperation Council states and senior officers from several other countries at the 21 October conference in Riyadh. (Saudi Ministry of Defence)

“Today’s meeting is to find the most appropriate ways to provide joint military capabilities that, God willing, protect vital and sensitive facilities as the region continues to suffer ongoing crises since the arrival of the Iranian revolutionary regime,” the MoD quoted Saudi Chief of the General Staff General Fayyad bin Hamed al-Ruwaili as saying.

The MoD said the conference was attended by Egypt, France, Germany, Greece, Italy, Jordan, the Netherlands, Pakistan, South Korea, the United Kingdom, and the United States. It released photographs showing that at least some of the representatives were senior – but not the top – officers from their countries.

The officers were shown the remnants of the missiles and unmanned aerial vehicles used against Saudi Arabia’s Abqaiq and Khurais oil facilities on 14 September.

They were all keen to find the best ways to defend and deter threats against Saudi Arabia’s critical infrastructure, territory, and territorial waters, the MoD said. It said details would be discussed at a force-generation conference to be held on 4 November.

Saudi Arabia hosted the military chiefs of staff from the five other Gulf Cooperation Council (GCC) ...

The UK Ministry of Defence (MoD) has awarded a cluster of contracts under which industry will explor...
Request Consultation