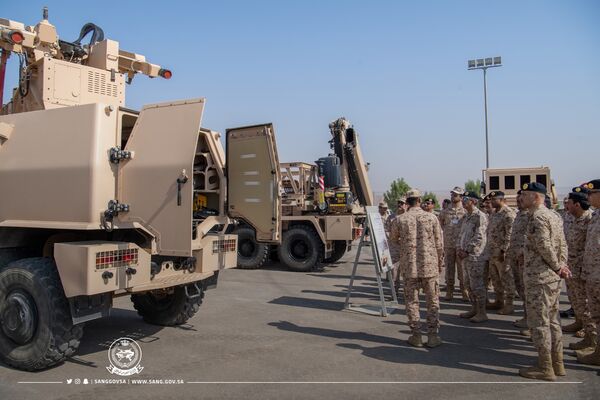 A VL MICA launcher is seen in the background during Major General Nayef bin Majid's visit to the SANG's Artillery and Air Defence Command, as well as an MPCV (left) and probably a VL MICA reload vehicle. (Saudi Arabia National Guard)

The Saudi Arabia National Guard (SANG) confirmed it has acquired the MBDA VL MICA on 9 November, when it released a photograph showing a launcher for the short-range air-defence system at one of its facilities in Riyadh.

The photograph was taken during a visit by Major General Nayef bin Majid, the minister for the SANG, to the force's Artillery and Air Defence Command in Riyadh.

It also showed an MBDA Multi-Purpose Combat Vehicle (MPCV), which has Mistral surface-to-air missiles in addition to a 20 mm gun in a remotely operated mount. The MPCV has been seen in service with the SANG alongside the MBDA Atlas: a truck-mounted manually operated Mistral configuration.

Neither the French government nor MBDA have confirmed the VL-MICA sale to Saudi Arabia, however, the French newspaper La Tribune reported in 2013 that the company had secured a EUR150 million (USD173 million) order to supply the air-defence system to the SANG.

A photograph of VL MICA launchers at Jeddah's port after their delivery began circulating in early 2018. These were carried on trucks made by Soframe: a French company that has supplied large numbers of vehicles to the SANG, including its Arive armoured personnel carrier.

The Royal Saudi Land Forces are also believed to have a requirement for a new mobile short-range air-defence system to replace their Crotales.