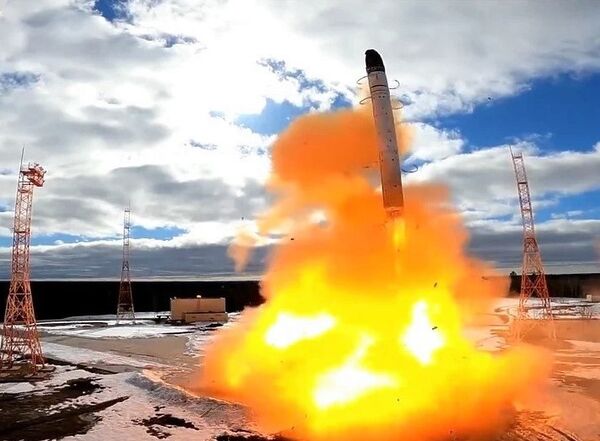 Russia conducted the first test of a super‐heavy RS-28 Sarmat ICBM (pictured leaving a silo) at the Plesetsk Cosmodrome in Arkhangelsk Oblast on 20 April. (Russian Ministry of Defence)

The Russian Ministry of Defence (MoD) announced in a press release on 20 April that at 1512 local time the first test of a super‐heavy RS-28 Sarmat intercontinental ballistic missile (ICBM) was conducted at the Plesetsk Cosmodrome in Arkhangelsk Oblast.

The MoD declared the test successful and said that the dummy warhead landed at the Kura test range on the Kamchatka Peninsula.

At least three ejection tests of the missile have been conducted since December 2017, all at Plesetsk, but the 20 April test represents the first full flight test of the missile.

Equipped with a multiple independently targetable re‐entry vehicle (MIRV), Sarmat is intended as a replacement for the legacy Voyevoda ICBM, which is known under its NATO designation as the SS-18 ‘Satan‘ Mod 5, resulting in the RS-28 being colloquially dubbed ‘Satan II'. Russia's Strategic Missile Forces (Raketnye Voyska Strategicheskogo Naznacheniya: RVSN) intend to retain the existing Voyevoda ICBMs until the Sarmat is officially accepted into service. The last Voyevoda ICBMs were thought to have been produced in 1992.

The three-stage Sarmat, also known under the GRAU index 15A28, was developed by State Missile Centre ‘Academician VP Makeyev' and is estimated to be approximately 35.5 m long and 3 m in diameter. The missile's maximum range is thought to be 18,000 km with a full mass totalling about 208.1 tonnes.

The Russian Ministry of Defence (MoD) announced in a press release on 20 April that at 1512 local ti...