Russian troops set to take part in the 9–13 August ‘Sibu/Interaction 2021' strategic military exercise with China's People's Liberation Army (PLA) have been familiarising themselves with Chinese military equipment in preparation for the joint manoeuvres: an indication of the growing military co-operation between Moscow and Beijing.

Video footage released by the Russian Ministry of Defence (MoD) on 3 August shows Russian troops – under the guidance of PLA instructors – training on Chinese 8×8 vehicles, including the ZTL-11 fire support vehicle and the ZBL-09 infantry fighting vehicle (IFV). The footage is part of a Russian MoD statement saying that the move marks the first time that Russian servicemen have “mastered modern models of military equipment and weapons” of the PLA. 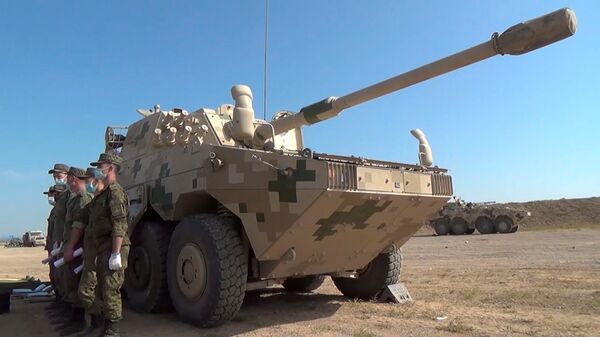 A screengrab from footage released by the MoD in Moscow on 3 August showing Russian troops alongside a Chinese ZTL-11 fire support vehicle as part of preparations for a Sino-Russian exercise set to be held in China from 9–13 August. (Russian MoD)

The move comes after Chinese troops were reported to have used Russian T-72B3 main battle tanks, BMP-3 IFVs, and Igla-S man-portable air-defence systems as part of Exercise ‘Kavkaz-2020', which was held in Russia.

The Russian MoD also noted that the process of learning to use PLA equipment has taken place in several stages, including theoretical training, classes on electronic simulators, as well as practical driving and shooting, adding that the training is being carried out both individually and as part of units.