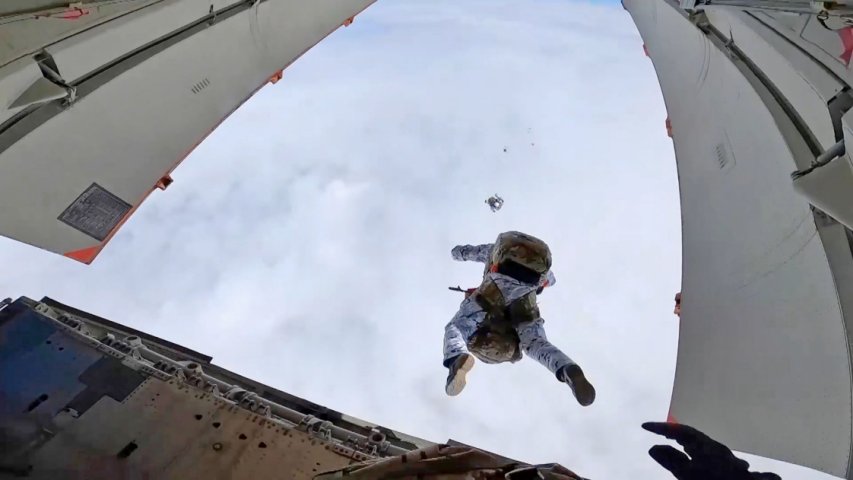 Russia's VDV undertaking the world’s first parachute jump from an aircraft at a height of 10 km in the Arctic close to Franz Josef Land. Russian Defence Minister Sergei Shoigu said Russian paratroopers performed the jump in commemoration of the upcoming 75th anniversary of the Soviet victory in World War 2 and the 90th anniversary of the VDV. (Russian MoD/TASS via Getty Images)

The Ministry of Defence (MoD) said three Ilyushin Il-76 transports airdropped the VDV unit on Franz Josef Land and then landed at Russia’s most northern airfield, Nagurskoye (Alexandra Land, part of the Franz Josef Land archipelago). Before landing, one of the Il-76s airdropped 18 tonnes of cargo from an altitude of 1,800 m.

Russian Military Transport Aviation (VTA) commander Lieutenant General Vladimir Benediktov said on 26 April that the airdrop was the first in the Arctic in Russian aviation history. It was preceded by the training of VTA crews involved in the airdrop, according to Lt Gen Benediktov. During the training, the crews analysed the manoeuvering and control of the aircraft as well as the functioning of their engines and subsystems. The airdrop was performed over featureless terrain without land beacons.

The paratroopers wore clothing and used Arctic equipment developed by Russian company Gruppa 99, a subsidiary of Rostec’s Kalashnikov Group. This comprises some 40 items, including the Nanuk outfit, a modular sleeping bag for low temperatures, an Arctic field tent, and various containers.

Tokyo to build JSDF base on Mage Island

The Japanese Ministry of Defense (MoD) has revealed plans to build a Japan Self-Defense Forces (JSDF...