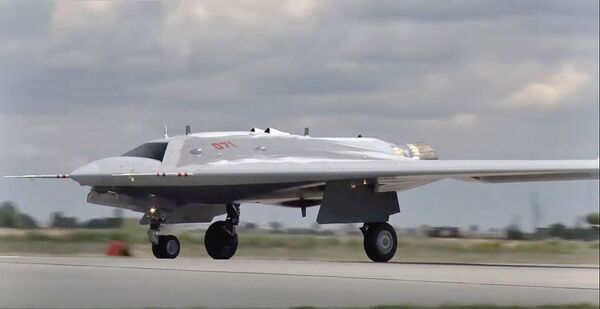 Although not identified in the report, it is likely that the missile was the Kh-59MK2 standoff cruise missile, which is a development of the Kh-59-series heavy tactical missile that entered service in the early 1980s.

Although advertised to have a maximum range of 250 km, the model variant of the missile developed for the Russian military is thought to have a substantially longer range that is closer to 500 km. The 4.2 m-long missile is of stealth design and has folding wings and fins to enable it to be carried inside an internal weapons bay. The Kh-59MK2 is guided by an inertial navigation system corrected by Global Navigation Satellite System (GLONASS) and Global Positioning System (GPS) satellite navigation systems during the cruise phase, and an electro-optical digital scene matching area correlator system in the terminal phase. The missile is reported to have a circular error probable of 3–5 m.

In December 2020 RIA Novosti said that Okhotnik conducted tests with simulation air-to-air missiles fitted with both infrared (IR) and radar seekers, but without rocket engines and warheads, to test the UCAV's fire-control systems. The testing was conducted at the 185th Combat Application and Training Centre of the Russian Aerospace Forces, more commonly known as the Ashuluk training range.