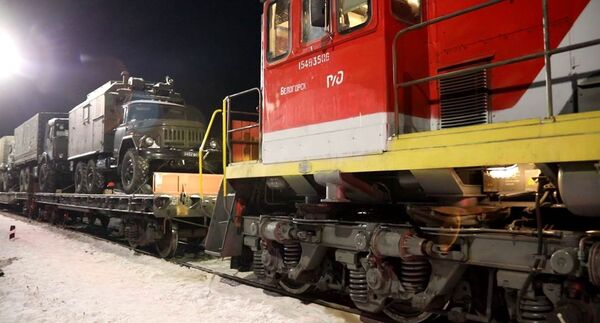 Following a relative lull in activity after 1 January, Russia's armed forces appear to have entered their highest level of activity and movement since the autumn-winter build-up began in late October.

Evidence indicates activity from all of Russia's major regional commands, and Moscow has also signalled that it will move a large number of surface vessels, including six landing ship tanks (LSTs), a cruiser, and a destroyer, into the Mediterranean Sea, where they could easily continue into the Black Sea. Janes expects the LSTs to enter the Mediterranean Sea by mid-week, followed by Pacific Fleet vessels by the end of the week. Russia also appears to be activating some troops and may be beginning to move aircraft and ground-support crews to operational airbases.

By far, the most significant of the movements is the mass deployment of forces from all five Eastern Military District (EMD) commands into Belarus under the guise of the Russian-Belarusian exercise, ‘ Allied Resolve 2022'. The EMD has deployed at least 15 units from all four of its combined arms armies and the Pacific Fleet since 4 January, with advanced elements having arrived in Belarus on 17 January.

The EMD force is well beyond its normal training, with the district's ground forces typically not leaving the district. It is equipped with at least two Iskander-M battalions, both of which have been observed carrying 9M273 ballistic missiles, long-range BM-27 multiple rocket launchers, and a large number of main battle tanks including the modernised T-80BVM and T-80BV, supported by army-level communications and logistics.