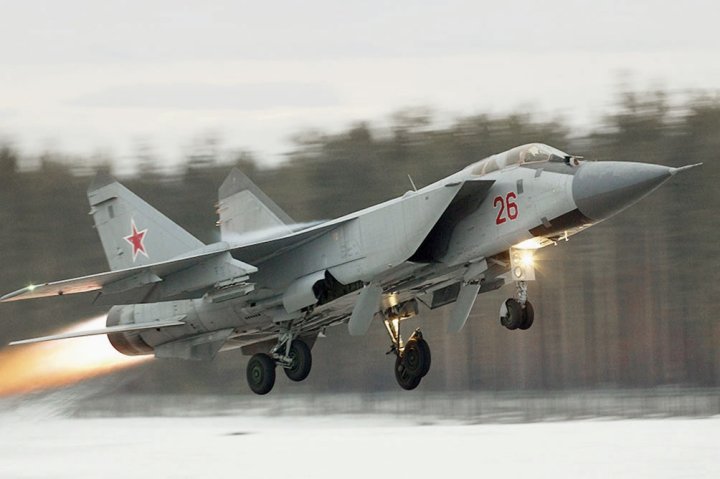 A MiG-31 interceptor departs on a sortie. The VKS aims to field a replacement being developed under the PAK DP programme by the late 2020s. (VKS)

Rostec announced on 22 January that PAK DA, which was touted as far back as 2015, has now commenced, saying, “Development of the next generation of interceptor fighters has already begun. The project of the PAK DP under the designation ‘MiG-41’ is at the stage of development work.”

News of the work comes some five-and-a-half years after the then commander-in-chief of the Russian Aerospace Forces (VKS), Colonel-General Viktor Bondarev, said in August 2015 that the effort would be launched in 2019, with the goal of fielding a replacement for the 1970s era MiG-31 in the 2028 timeframe.

The VKS is currently upgrading 130 of its approximately 200 ‘Foxhound’ aircraft to the latest MiG-31BM standard. This upgrade encompasses the aircraft’s avionics, cockpit displays, datalinks, radar, and fire-control systems, and will also see the refurbishment of the fuselage and landing gear.

By the time this process is complete, the MiG-31BM will be fit to serve through to the 2030s. Even so, the VKS has said that it is looking to field a replacement in about the 2028 timeframe. Specific details, such as performance specifications, pertaining to this PAK DP replacement have not yet been released. However, over recent years Janes

Russia has officially launched the development of a replacement for the MiG-31 ‘Foxhound’ intercepto...