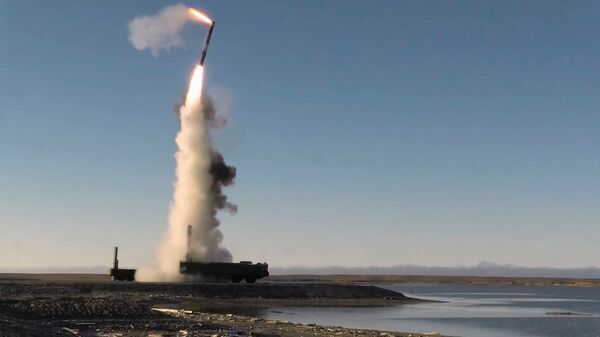 A Bastion coastal defence missile system is pictured launching an Oniks missile in the Arctic in 2018. Russia has deployed the same system to Matua, an island in the Kuril chain in the northwest Pacific Ocean. Ownership of this chain of islands is disputed by Russia and Japan. (Russian MoD)

The Russian military has deployed its K-300P Bastion-P mobile coastal defence missile system in the Kuril Islands, a chain in the northwest Pacific Ocean, the ownership of which is disputed by Japan and Russia.

The Russian Ministry of Defence (MoD) said on 2 December that the Bastion-P deployment signals the start of deployments from a new Russian military base on Matua, an uninhabited volcanic island near the centre of the Kuril chain that is not claimed by Japan.

In a statement, the MoD said that Bastion-P systems have been deployed “for the first time … on Matua” to provide round-the-clock “monitoring [of] the adjacent waters and straits”. It said the missile system and associated personnel, equipment, and materiel were delivered to the island by landing ships from the Primorsk Flotilla of the Pacific Fleet's diverse forces.

The MoD statement did not specify the number of Bastion-P systems deployed to the island, but a video issued by the ministry showed several missile carriers moving ashore from Pacific Fleet amphibious landing vessels and driving along the coast of Matua.

The MoD also said that the Pacific Fleet has completed work on constructing facilities on Matua that will enable the “year-round” deployment and support of personnel and military equipment. It added that personnel have started duties from this base and will be “carrying out planned combat training activities”.

The Russian military has deployed its K-300P Bastion-P mobile coastal defence missile system in the ...