Since mid-June, Russia has bolstered its naval and aviation presence in the Mediterranean theatre of operations, reinforcements that the Russian Ministry of Defence's (MoD's) TV Zvezda announced on 25 June will be used to “to monitor the actions of the [HMS Queen Elizabeth] aircraft carrier group.” 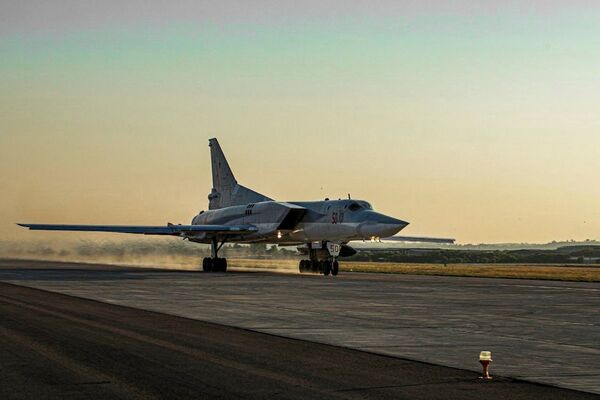 The Russian MoD published this photo on 25 June of a Tu-22M3 bomber with tail number Red 50 carrying a Kh-22 anti-ship missile taking off from Humaymim airbase in Syria. (Russian MoD)

Video footage broadcast by TV Zvezda on 25 June shows three Tu-22M3 bombers with tail numbers Red 50, Red 15, and Red 28 at Humaymim airbase in Latakia, Syria. At least two of the aircraft appear to be carrying Kh-22 air-launched anti-ship missiles. Red 15 and Red 28 are assessed by Janes to be part of the 52nd Heavy Bomber Regiment stationed in the Kaluga region, while Red 50 is believed to belong to either the 52nd or 200th Heavy Bomber Regiment based in Irkutsk. These three aircraft appear to be the same Tu-22M3s that conducted a four-day rotation to Humaymim on 24–28 May.

In addition to the Tu-22M3s, the 25 June footage from TV Zvezda showed the deployment to Humaymim of at least two MiG-31K combat aircraft with tail numbers Red 90 RF-95215 and Red 96. No weapons can be seen attached to the aircraft's hardpoints in the footage. TV Zvezda also reported that an Il-38 anti-submarine maritime patrol aircraft (MPA) had been deployed to Humaymim airbase but did not show it in the footage. Janes

Since mid-June, Russia has bolstered its naval and aviation presence in the Mediterranean theatre of...