Russia is continuing to deploy troops to Crimea and its Ukrainian border, with Ukrainian Foreign Minister Dmytro Kuleba saying on 20 April that Russia would soon have more than 120,000 troops on the border, Reuters reported. 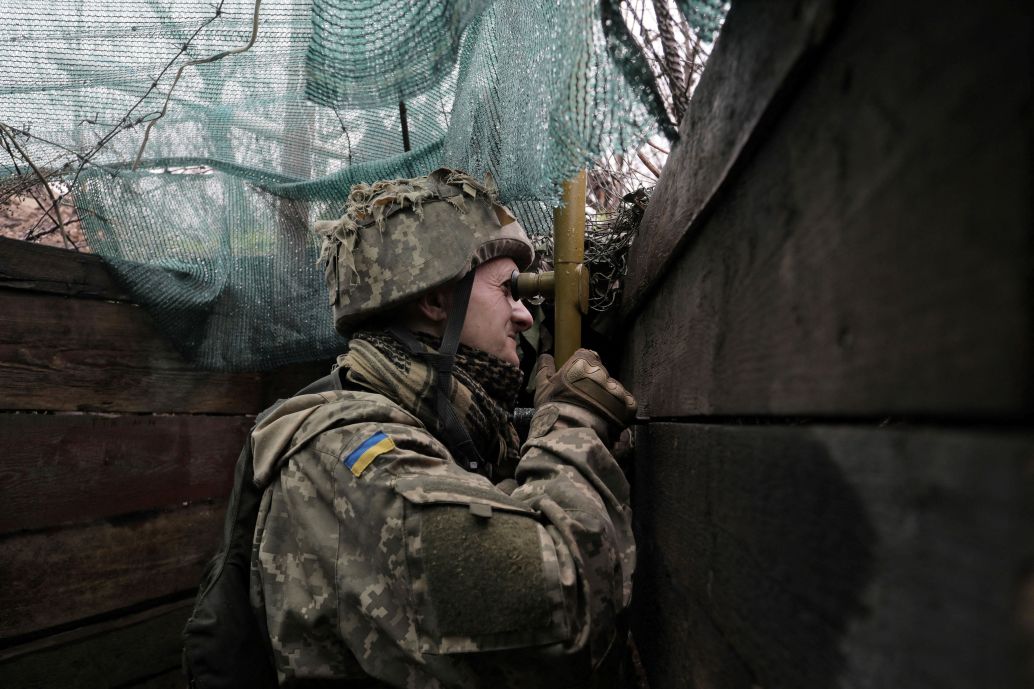 A Ukrainian soldier uses a periscope on the front line with Russian-backed separatists near Marinka, Donetsk, on 20 April. (Aleksey Filippov/AFP via Getty Images)

The Black Sea Fleet’s amphibious capability has been further reinforced with four large landing craft from the Northern and Baltic Fleets that entered the Black Sea through the Bosporus on 17 April.

Meanwhile, an A-50U aircraft of the 144th Airborne Early Warning and Control Regiment has deployed from Ivanovo, northeast of Moscow, to Taganrog airbase in the Rostov region. A-50Us are designed to provide an airborne command-and-control capability and are often deployed to forward airbases ahead of Long-Range Aviation Group flights.

The T-Intelligence open-source intelligence platform reported on 20 April that Russia had issued notices to airmen and mariners marking danger areas related to training exercises for most of Crimea’s Black Sea coast. Passage through the Kerch Strait will be restricted for “warships and state ships of other countries” until October, Interfax Ukraine reported on 15 April.

Russian exercises in the Black Sea began with the loading of naval infantry and equipment onto landing ships. Russia’s TASS news agency reported on 19 April that naval infantry stationed in Crimea, which Janes

Russia is continuing to deploy troops to Crimea and its Ukrainian border, with Ukrainian Foreign Min...

Russia moves equipment away from training ground near Ukrainian border

Video footage and imagery sourced from social media and analysed by Janes between 13 July and 21 Jul...

Russia has continued moving troops towards its western border with Ukraine. Janes has identified the...

A zoonotic virus that emerged in Wuhan, China, in December 2019 has now spread to almost every count...
Request Consultation