Russia's military build-up in Belarus and along the Ukrainian border has continued unabated over the past 14 days. Social media indicates the frequency of deployments has increased, with daily sightings of equipment on the move at their highest since the build-up began in October 2021.

Eastern Military District (EMD) ground forces have begun deploying to several sites in Belarus, mainly along the country's southern border with Ukraine. S-400-air defence systems have also begun to arrive, and the Janes assessment is that one of the battalions – likely belonging to the 1529th Air Defence Regiment stationed in Khabarovsk – has been unloaded at Luninets railway station, about 50 km from the Ukrainian border.

In addition to EMD ground forces, multiple Russian Airborne Forces (VDV) units have also been identified deploying into Belarus. At least one battalion each from the 76th and 98th Airborne Divisions – stationed in Pskov and Ivanovo – and likely elements of the 45th Spetsnaz Brigade have also deployed to various locations in the country.

Russian military activity has also increased outside Belarus. There are now multiple indicators suggesting troops have begun deploying to forward camps to join up with their prepositioned equipment. Video posted on social media indicates some troops from Siberia, whose equipment has already been moved to sites in Smolensk and Bryansk, are in the process of deploying. Satellite imagery also shows the deployment of tents to 58th Combined Arms Army equipment stores in Crimea. The imagery also shows the likely deployment of a field hospital under way at the Angarsky training ground, indicating troops are expected.

Some camps also appear to be expanding further, with a recent uptick in activity at railway stations near the 1st Guards Tank Army equipment stores at the Pogonovo training ground corresponding with satellite imagery showing a new deployment of an additional 4th Tank Division battalion tactical group (BTG) to the site. The imagery also shows the likely deployment of four Iskander wheeled missile launchers at the site, but it is unclear when exactly they arrived.

Russia also appears to be activating Rosgvardia internal troops. Janes has identified multiple Rosgvardia equipment either being transported by rail or moving by road from across western Russia. While no Rosgvardia camps have yet been identified and there is no definitive link to Russia's military build-up, the need for their participation in any combat operations of this scale is widely accepted. Rob Lee, a fellow in the Foreign Policy Research Institute's Eurasia programme, told Janes on 3 February, “Rosgvardia troops could be used for a few purposes. They could be used for occupying areas in Ukraine if Russia decides to pursue that option. They can help secure parts of Russia from sabotage or other attacks from Ukrainian SOF [special operations forces] and intelligence [as they have] actually done … over the past year. They can help enforce greater operational security measures in Russia before the troops from the 41st CAA [Combined Arms Army] and elsewhere arrive to man the equipment prepositioned near Ukraine.”

The Russian navy has also continued its deployments, with all six landing ships from the Baltic and Northern Fleets entering the Mediterranean by 27 January. A destroyer and cruiser from the Pacific Fleet were as of 3 February heading towards the Suez Canal, with their passage expected by 4 February at the latest. A further joint Northern and Baltic Fleet task force comprising five surface combatants is also deploying to the Atlantic Ocean southwest of Ireland's exclusive economic zone for exercises. 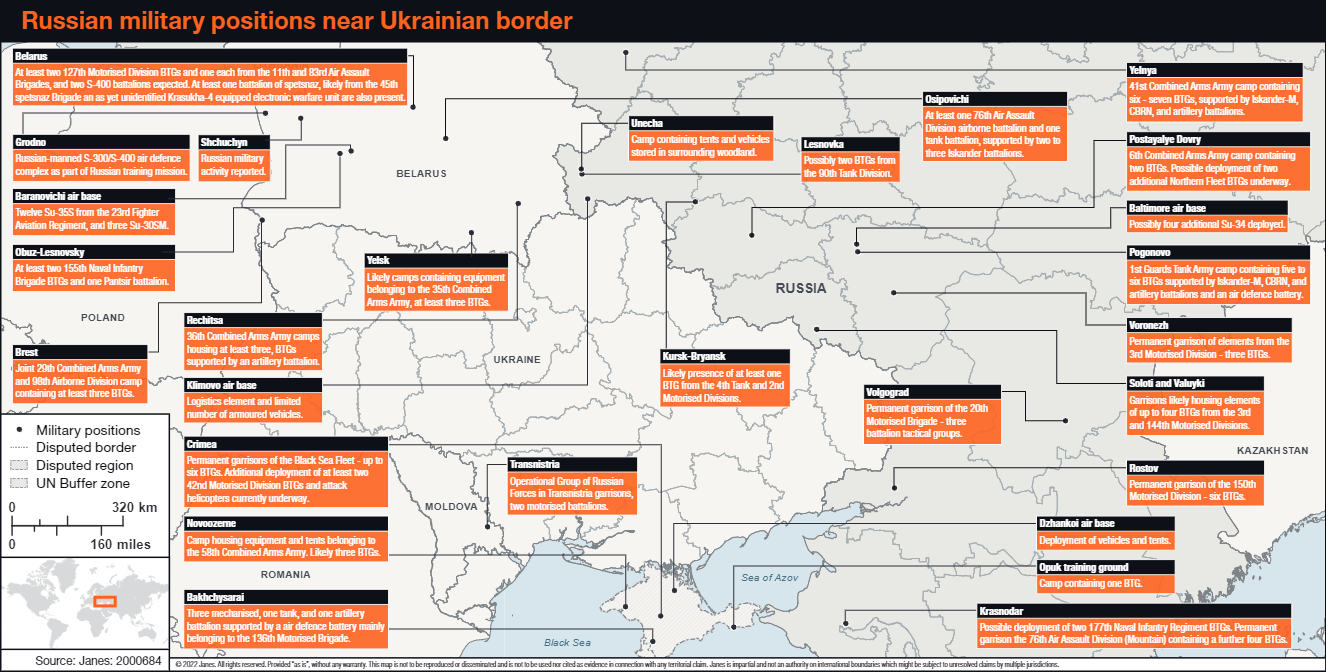 Russian military positions near the Ukrainian border as of 1 February. (Janes)

Russia's military build-up in Belarus and along the Ukrainian border has continued unabated over t... 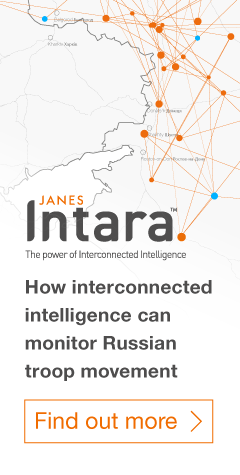