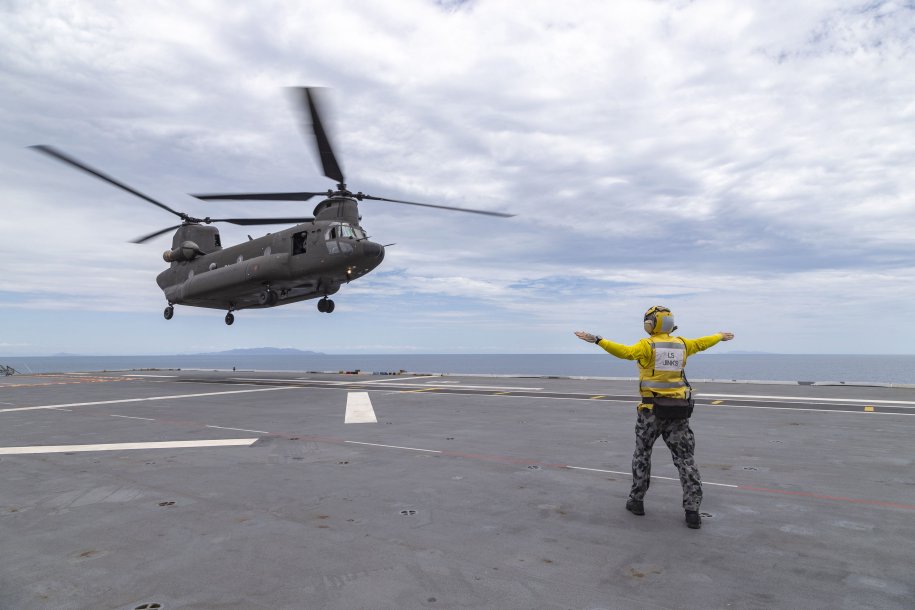 An RSAF CH-47 helicopter landing aboard HMAS Adelaide off the coast of Townsville, Queensland. Canberra announced on 25 October that RSAF CH-47 crews have qualified to operate from the RAN’s two Canberra-class LHDs. (Australian Department of Defence / Commonwealth of Australia 2020)

The CH-47 crews spent two days flying from Townsville to HMAS Adelaide out at sea to undertake deck-landing qualifications, said Australian Defence Minister Linda Reynolds in a 25 October statement, adding that this included communicating with the warship’s flight control room and being guided by Australian sailors on the flight deck.

“The ability to operate our largest amphibious vessels with Singapore’s CH-47 Chinook helicopters means we can work together to mobilise and move personnel or supplies at sea, and enhance our combined joint capability,” said the minister, who described the successful qualification of the RSAF crews as “a force-multiplier for both nations”.

The latest developments come after an Australian Department of Defence spokesperson told Janes on 20 August that the RSAF is to increase the number of CH-47 Chinook helicopters based at the Australian Army’s Oakey Aviation Training Centre in Queensland.

“Defence can confirm that the number of RSAF Chinook helicopters based at Oakey will be increased under the terms of the current agreement between the Commonwealth of Australia and the Republic of Singapore,” said the spokesperson at the time.