The prototype was handed over to the service in a ceremony held on 9 July at the Thanarat Infantry Camp in Thailand’s western Prachuap Khiri Khan Province, according to an announcement made the following day by the country’s Defence Technology Institute (DTI). 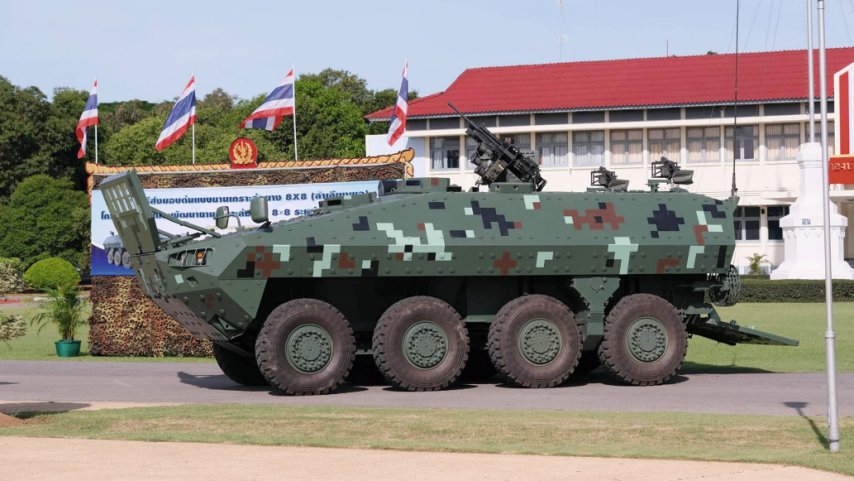 The RTA was handed over a new prototype of the locally developed Black Widow Spider wheeled AFV on 9 July. (DTI)

No further details were provided but an image of the 8×8 platform shows that it has been fitted with a remote weapon station (RWS), similar in appearance to the ADDER DM40/50 from Singapore’s ST Engineering, mounting a 12.7 mm (.50 cal) machine gun, a 40 mm automatic grenade launcher, and six smoke grenade launchers.

The Black Widow Spider, a mock-up of which was first unveiled at the Defense & Security 2013 exhibition in Bangkok, weighs about 25 tonnes, is about 7 m long, 2.7 m wide, and can carry nine troops, a gunner, commander, and driver. It was developed by DTI in collaboration with Singapore Technologies Kinetics (ST Kinetics) and local industry.

The vehicle, which has also been previously displayed armed with a 30 mm MK44 dual-feed cannon and a 7.62 mm co-axial machine gun, has a stated top speed of 100 km per hour, an operational range of 600 km, and operates with an independent suspension system and a central tyre inflation system.

It is also designed to achieve STANAG 4569 Level 4 ballistic protection. Another feature of the vehicle is its modular concept, which the DTI has said enables the vehicle to be reconfigured to meet a variety of operational requirements.

The Royal Thai Army (RTA) is set to begin trials of a new prototype of the locally developed Black W...