The Royal Canadian Air Force (RCAF), for the first time in about four years, trained with Boeing F/A-18 (CF-18/CF-188 in national service) Hornet fighters and an Airbus A310 (CC-150T in Canada service) Polaris aerial refuelling tanker in the high north region around Baffin Island.

From 18 to 20 January, the RCAF conducted training from Iqaluit, Nunavut with two CF-18s and one CC-150T, according to a service statement. The training saw CF-18s from Bagotville, Quebec, rendezvous with the CC-150T around Baffin Bay. 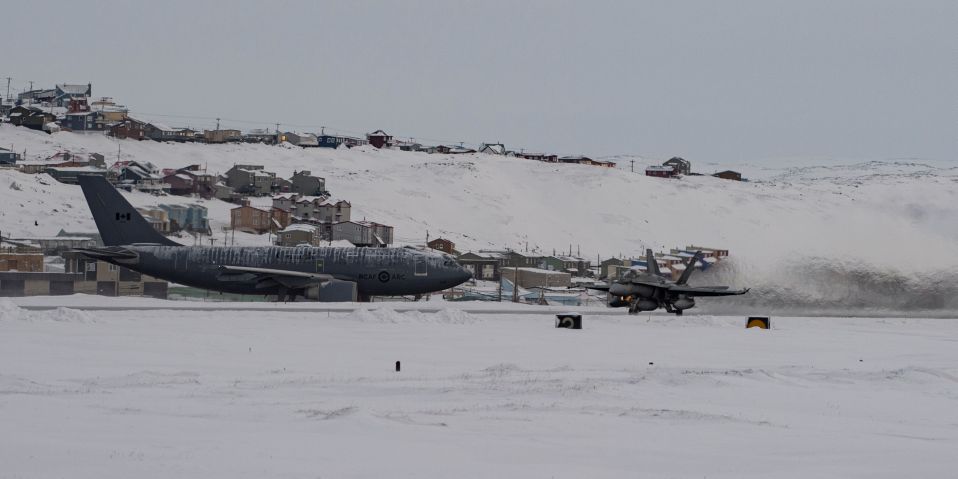 The RCAF exercised with a CC-150T aerial refuelling aircraft (left) and a CF-18 around Baffin Island from 18 to 20 January. (Royal Canadian Air Force)

The aircraft successfully conducted air-to-air refuelling before continuing north for the remainder of the mission and conducting an Arctic patrol up the northeast side of Baffin Island, in the vicinity of Nanisivik, Nunavut. Major General Eric Kenny, commander of 1 Canadian Air Division, commander Canadian North American Aerospace Defense Command (NORAD) region, Joint Forces Air Component commander, told Janes on 26 January that he is trying to step up training using the CC-150T and CF-18s. He wants to use these aircraft in scenarios similar to what they would employ for his responsibility as the commander of the Canadian NORAD region where they can respond to air threats or incursions within, or around, the approaches of Canada.

Maj Gen Kenny told Janes on 28 January that the RCAF wants to exercise its crews’ ability to operate in challenging weather conditions year-round. The service also wants to exercise its crews’ mission-planning abilities to include things such as support requirements and maintenance that take on additional importance as the RCAF operates further from its main operating bases.

The Royal Canadian Air Force (RCAF), for the first time in about four years, trained with Boeing F/A...