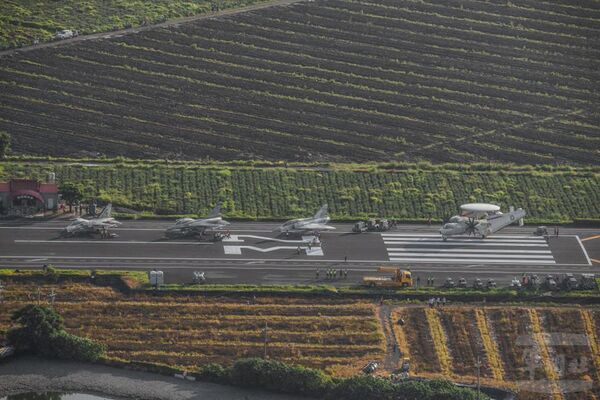 RoCAF F-CK-1 Ching Kuo, F-16V, and Mirage 2000-5 fighter aircraft along with an E-2K aircraft during emergency take-off and landing drills that were conducted from a provincial highway in Taiwan on 15 September during this year's ‘Han Kuang' military exercises. (Military News Agency )

Republic of China Air Force (RoCAF) aircraft have taken part in a take-off and landing exercise in which they used highways as emergency airstrips for the first time.

The drill, which was aimed at testing the ability of RoCAF pilots to operate from narrow and shorter runways, was held on 15 September as part of Taiwan's annual ‘Han Kuang' military drills.

Taiwan's Military News Agency (MNA) reported that the exercise took place at 0630 h local time on a 2.26 km-long section of the 24 m-wide N.1 Provincial Highway near Jiadong in Pingtung County, marking the first such RoCAF drill conducted on a provincial highway. The four aircraft landed were refuelled on the highway, and took off within 30 minutes to perform additional tasks.

According to military sources, the exercise, which was attended by Taiwanese President Tsai Ing-wen and Defence Minister Chiu Kuo-cheng, tested the ability of pilots to land on and take off from narrow airfields in case airstrips at Pingtung airbase are damaged during an attack.

Janes understands that the ability to operate military aircraft from regular highways in case of conflict is vital to ensure that logistics operations continue uninterrupted.

The US government has approved the follow-on sale of Lockheed Martin MH-60R Seahawk maritime helicop...