The Republic of China Army (RoCA) practised different camouflage techniques for tanks and armoured vehicles operating in an urban environment during a five-day exercise that began on 26 October. 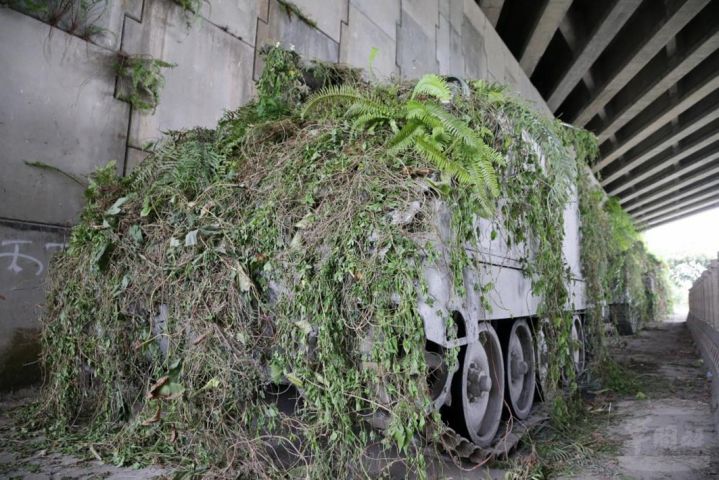 An image showing what appeared to be several RoCA M113-derived armoured vehicles covered in foliage under a bridge during an exercise aimed at practising concealment and camouflage techniques in an urban environment. (RoC Military News Agency)

The exercise, which also involved the navy and air force, is part of ‘Combat Readiness Week’, with Taiwanese media quoting Ministry of National Defense (MND) spokesperson Shih Shun-wen as saying that armoured brigade personnel were ordered to attach camouflage netting and other materials to their vehicles as well as practise utilising nearby features, city structures, vegetation, and civilian areas to increase their survivability during a potential attack.

The MND noted that through this exercise the troops were able to improve their “concealment, camouflage, deception, and manoeuvrability” capabilities, according to the principle of “fight wherever the battle is”.

Among the most unique camouflage examples of urban camouflage displayed by the RoCA was what appeared to be a CM-32/33 Cloud Leopard 8×8 armoured vehicle covered in a combination of cloth and yellow-painted wooden boards and frames. The camouflage makes the Cloud Leopard somewhat resemble a civilian construction vehicle.