KD Keris (with pennant number 111), the service’s first of four Littoral Mission Ships (LMSs), was officially welcomed at the Sepanggar naval base at Kota Kinabalu – located in the state of Sabah in the Malaysian part of the island of Borneo – on 17 January. 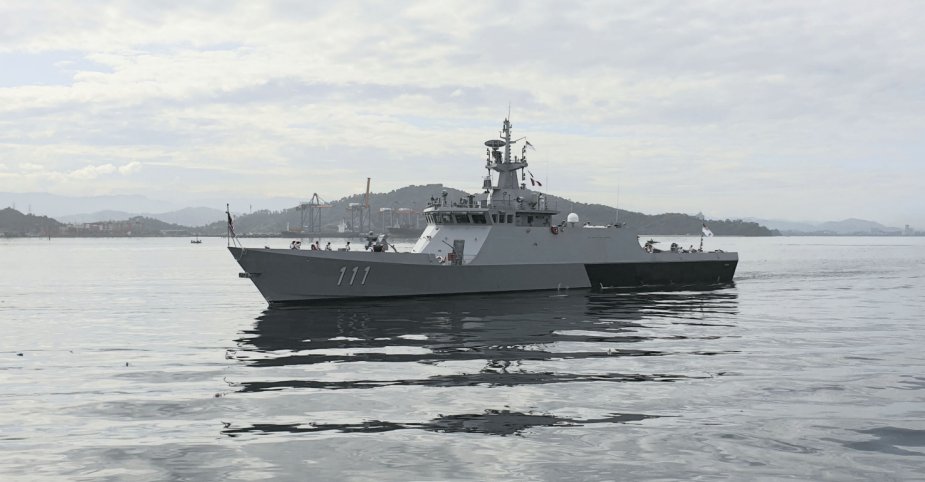 KD Keris , the RMN’s first LMS, arrived in Malaysia on 17 January after being commissioned 11 days earlier in a ceremony held at the facilities of Wuchang Shipbuilding at Qidong, near Shanghai. (Marhalim Abas )

The 68.8 m-long vessel, which had been commissioned in a ceremony held on 6 January at the facilities of Wuchang Shipbuilding at Qidong, near Shanghai, will be home-ported at Sepanggar along with the other three LMSs, all of which are also being made in China. The ship had been handed over to the service on 31 December 2019 and left Qidong on 8 January.

RMN chief Admiral Mohd Reza Mohd Sany pointed out that the Keris class, which has a crew complement of 45, has an endurance of 15 days at sea, and added that the RMN’s second LMS, Sundang , is expected to arrive this April at the Sepanggar base, which also serves as the headquarters for the RMN’s Eastern Fleet.

Adm Mohd Reza said that the entry into service of both LMSs will provide the RMN with more options to conduct its operations in the waters off Sabah and Sarawak, the other Malaysian state on Borneo. The ships will ease the burden of the navy, which is saddled with high maintenance costs as the fleet has mainly been operating ships that are on average 30 years old, he added.