Rheinmetall announced on 2 June that it has completed delivery of the first 25 of 211 Boxer 8×8 combat reconnaissance vehicles (CRVs) on order for the Australian Army under Canberra's Land 400 Phase 2 (also known as Mounted Combat Reconnaissance Capability) project. 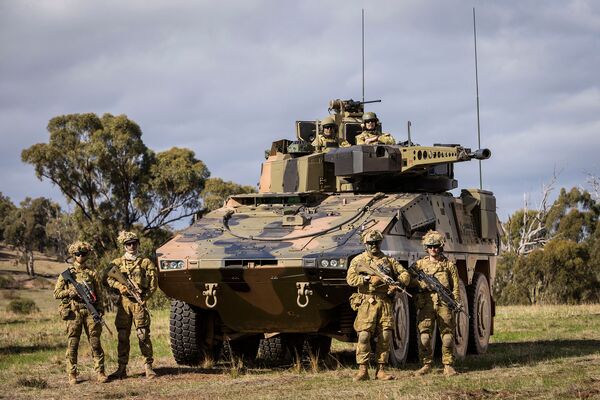 Australian Army soldiers with a Boxer CRV during Exercise 'Chong Ju' in May 2018. Rheinmetall announced on 2 June that the company has delivered the first 25 of 211 Boxers on order for the Australian Army. (Commonwealth of Australia/Australian Department of Defence)

The 25 vehicles – 13 multipurpose and 12 reconnaissance variants – were manufactured in Germany to meet an early Australian capability requirement for familiarisation and training.

Rheinmetall said in a statement that these initial deliveries will enable the army to “continue towards initial operating capability on schedule” as the company moves into the next phase of the programme.

Production of the remaining 186 platforms – a mix of reconnaissance, command-and-control, joint fires, surveillance, ambulance, and battlefield repair and recovery variants – is slated to begin in 2022 at Rheinmetall Defence Australia's (RDA's) Military Vehicle Centre of Excellence (MILVEHCOE) at Ipswich, southwest of Brisbane.

In March 2018 Canberra selected the Boxer vehicle to replace the army's ageing fleet of 247 Australian Light Armoured Vehicles (ASLAVs) at an acquisition cost of AUD5.2 billion (USD4.02 billion) for the 211 platforms.

The latest developments come as the Australian Army is deploying its new Boxer vehicles in their largest exercise yet since entering service in early 2020.

Exercise ‘Diamond Walk' at the Shoalwater Bay training area in Queensland, a foundation warfighting activity for the Brisbane-based 7th Combat Brigade, began in mid-May and is set to conclude on 7 June.

Rheinmetall announced on 2 June that it has completed delivery of the first 25 of 211 Boxer 8×8 comb...