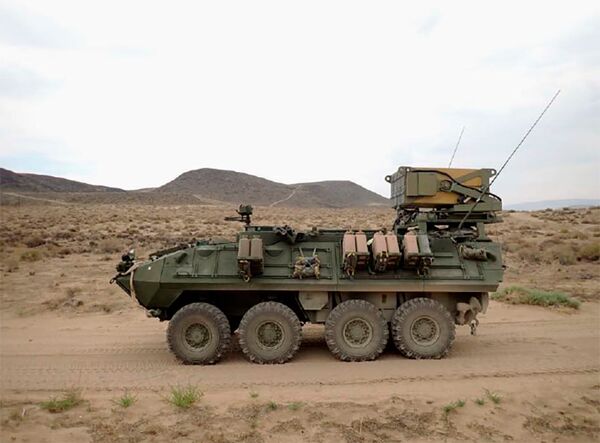 The US Marine Corps is equipping vehicles with Hero-120 for its OPF-M requirement, and Rheinmetall and UVision foresee integrating Hero into Lynx and Fuchs armoured vehicles. (UVision)

Rheinmetall announced in a press release on 12 January that it had signed a strategic partnership agreement with UVision on the Israeli company's Hero loitering munition aimed in the medium term at establishing a joint venture for the development and production of the munition. Romano Ricca, chief business development and sales officer of Rheinmetall Weapons and Munition subsidiary RWM Italia, said that the agreement was signed on 11 October 2021.

Rheinmetall will market UVision products in Europe as the first phase of the co-operation, with joint development activities planned for the second stage. The German company will pursue European and NATO standards for Hero, as well as work on requirements and customisation of the loitering munition, Ricca said. The weapon would be integrated into land and sea platforms, he added.

Dagan Lev Ari, UVision's sales and marketing director, said Hero can be launched from vessels during amphibious landings by marines. Vessels can fire Hero munitions 20 km from the shore out of range of anti-tank guided missiles and behind tall buildings, he added.

The only Hero export customer Rheinmetall and UVision would reveal is the US Marine Corps, which is equipping vehicles with Hero-120 for its Organic Precision Fires-Mounted (OPF-M) requirement. Lev Ari said Hero had also been integrated into an EINSA vehicle. The Spanish company is supplying its Netón Mk2 Vehículos Ligeros de Operaciones Especiales (VLOE) light special operations vehicles to the Spanish Army. Hero was presented at Defence and Securit Equipment International (DSEI) 2019 integrated into a Netón vehicle. Lev Ari also foresees Hero being integrated into Lynx and Fuchs (Fox) armoured vehicles.