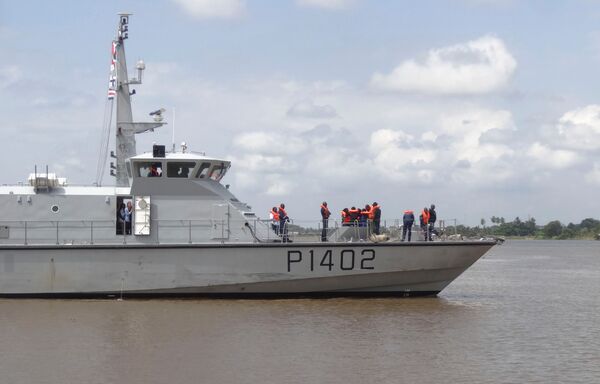 A French naval vessel in the port of Abidjan on 8 November 2019 participates in an exercise with Côte d'Ivoire authorities to tackle piracy in the Gulf of Guinea. International co-operation is key for regional states' efforts to tackle the problem. (Patrick Fort/AFP via Getty Images)

The Nigerian Maritime Administration and Safety Agency's (NIMASA's) Director-General Bashir Jamoh stated on 16 September that costs incurred by piracy in the Gulf of Guinea amounted to USD783 million in 2021. Since 2016, the Gulf of Guinea has become a global hotspot for piracy, with increasing levels of violence against crew members.

According to the International Maritime Bureau's (IMB's) Piracy Reporting Centre piracy report for the first quarter of 2021, the Gulf of Guinea region accounted for 43% of all globally reported piracy incidents during that time period, with the region's share decreasing to 32% for the first half of 2021. As of 24 September, the IMB had recorded 26 piracy events in the region in 2021. However, the IMB also reported that the figures globally for the first half of 2021 were the lowest since 1994.

In addition, pirate action groups (PAGs) have extended their operational range geographically, with attacks spreading across the Gulf of Guinea and westwards beyond the territorial waters of the littoral states. According to IMB data, between 2018 and 2019 kidnapping and ransom attacks rose by 50% in the Gulf of Guinea, and by approximately 10% between 2019 and 2020. However, the IMB report noted that recorded kidnappings in the second quarter of 2021 were the lowest since the second quarter of 2019. The report highlighted actions by “various coastal response agencies and independent international navies tasked in the region” for the trend.

The US Navy (USN) is restarting Freedom-class ship deliveries, however, propulsion plant issues have...
Request Consultation