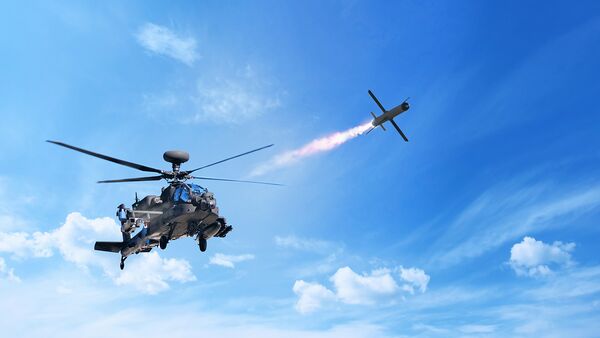 The Mk 6 Spike NLOS will be demonstrated on the AH-64E Apache Guardian during the initial LRPM evaluation shoot-offs later this year. (Lockheed Martin)

Furnished with a smokeless (low visibility/low acoustic signature) solid-propellant rocket motor, the munition is 1.7 m in length, weighs 71 kg, and can be equipped with three warhead options tandem high-explosive anti-tank (HEAT), penetrating blast fragmentation (PBF) and fragmentation. The Mk 5 is capable of engaging stationary or moving targets in day/night/adverse weather conditions in either direct attack mode or mid-course navigation mode, based on received target co-ordinates, at air-launched (rotary-wing) ranges between 1–32 km, and at surface-launched (ground/maritime) range between 1–25 km.

The new Spike NLOS Mk 6 development retains the inherent functionalities of the Mk 5 but introduces new software-enhanced capabilities “to account for modern battlefield needs and trends”, according to Rafael.

Rafael Advanced Defense Systems has disclosed the development of a sixth-generation evolution of its...