Rafael Advanced Defense Systems has disclosed the development of Sea Breaker – a new, fifth-generation, autonomous, precision-guided, long-range missile system, designed for precision engagement of emerging and next-generation maritime and land threats, stationary or moving, at ranges out to 300 km.

Described by Rafael as “a naval and artillery force multiplier”, Sea Breaker is a day/night all-weather effector for use with naval platforms and shore-based launchers operating in what the company characterises as the “new battlefield”, where precision accuracy and low-collateral damage are required in a target environment protected by advanced electronic warfare, anti-access/area denial (A2/AD) and GPS/GPSS jam and denial systems. 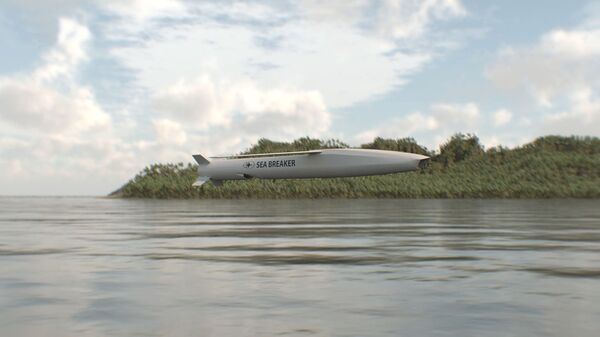 Approximately 350 mm in diameter, less than 4 m in length, and weighing under 400 kg, the new missile is equipped with an advanced Rafael-proprietary 107 kg penetrate, blast, and fragmentation warhead, which, the company says, “is capable of neutralising a frigate-sized ship in a single hit”.

Canister-launched with a booster, and powered in flight by a turbojet engine delivering high subsonic engagement speeds, Sea Breaker features an aerodynamic airframe with an integrated aft air intake underneath the missile, a cruciform tail assembly, and a mid-body, backwards-stowed deployable wing assembly. The deployed wingspan measurement is not disclosed, although Janes understands that it features similar geometries to the company's Spice 1000 tactical stand-off air-to-surface glide weapon system.