Rafael Advanced Defense Systems announced on 4 February that it conducted a recent test firing of its Spike Non-Line-Of-Sight (NLOS ) missile from an eight-round launcher carried by a Tomcar light buggy in Israel’s southern desert. 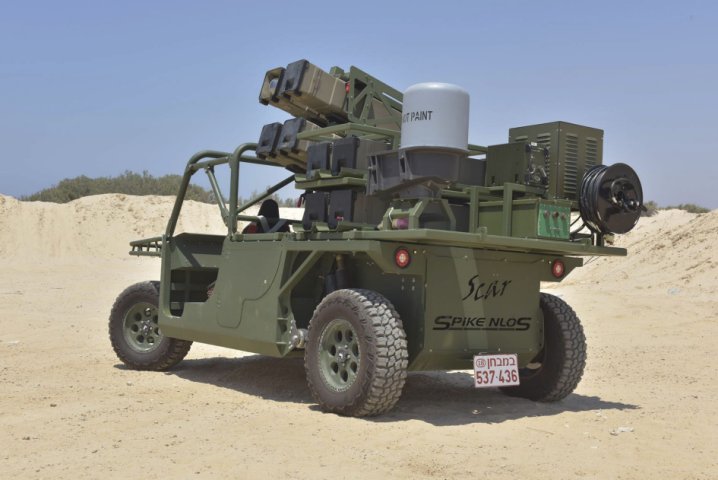 The Spike NLOS has a range of 30 km and can be guided by an operator using an electro-optical sensor. Rafael said the system is operational in 31 countries.

In a statement, the company said the Spike NLOS launcher used in the latest test “weighs only 1,350 kg, including eight rounds, providing armies and special forces with a low-weight, manoeuvrable, precision element that can be easily air deployed deep into enemy territory and used to attack point targets, static and mobile, with very high precision, and with no dependence on GPS”.

Rafael has released a video showing test firings at targets more than 25 km away and at a variety of trajectories.

A company official told Jane’s that the Tomcar did not require any modification, saying this is “part of the advantage of the launcher’s modular design”. He added that Rafael developed the launcher to meet an operational requirement from several clients for a launcher that can either be supplied with a light vehicle or on a pallet that can be installed on a vehicle of the clients’ choice.

The company source added that this configuration is different from Rafael’s SPARC towed launcher for Spike NLOS missiles, which can be remotely operated from a control station using a fibre-optic connection.

The SPARC was specifically designed for clients deploying the system to forward operating bases in Afghanistan, allowing their personnel to engage targets from inside a protected position.

Rafael Advanced Defense Systems announced on 4 February that it conducted a recent test firing of it...