The UK Royal Air Force (RAF) is to expand its plans to field ‘swarming drones', with the service chief saying on 14 July that he has a “futuristic and ambitious” vision for the capability. 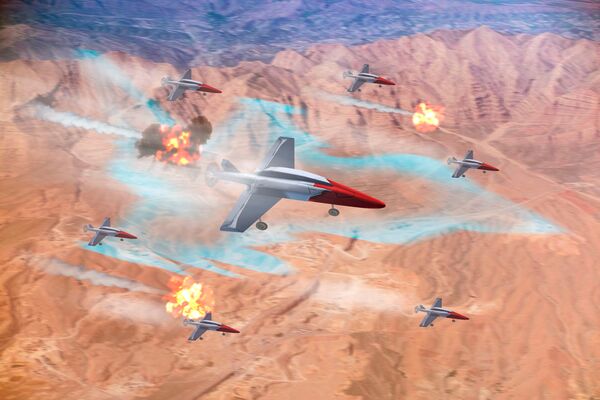 An artist's impression of a swarming drone demonstration that Leonardo conducted for the RAF in 2020. (Leonardo)

Speaking at the Air and Space Power Association's Global Air Chiefs conference in London, Air Chief Marshal Sir Mike Wigston said that trials conducted so far had demonstrated the potential of the capability, and that the RAF is now on a path to turning this potential into an operational reality.

“With swarming drones and uncrewed combat aircraft, we are on the threshold of a change in air warfare as profound as the advent of the jet age,” ACM Wigston said. “Our drone test squadron, 216 Squadron, has proved beyond doubt the disruptive and innovative utility of swarming drones under our Alvina programme…. That success, in little over a year, points to the operational utility of swarming drones. I aim to declare it operational in an equally short period of time, with more than one squadron, such is its impact; and we will spirally develop it year by year, moving swiftly where the technology allows and the threat invites”.

As ACM Wigston noted, the trials conducted by 216 Sqn have included demonstrations of exercised swarms of over 20 ultra-low cost ‘drones' operating together against threat systems “to brilliant effect”.

“We have been focused on confusing and overwhelming adversary air defences but we are already contemplating new disruptive missions, that I will leave to your imagination,” he said.