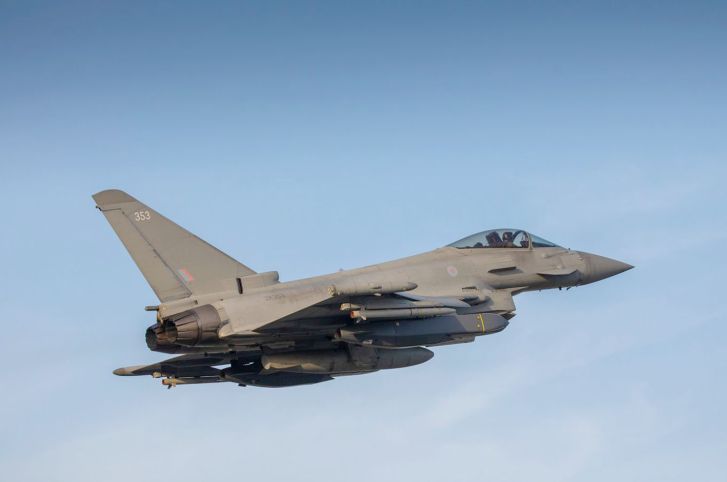 An RAF Typhoon carrying a pair of Storm Shadows on what was the aircraft’s first operational use of the long-range cruise missile. (Crown Copyright)

Eurofighter Typhoon FGR4 combat aircraft operating out of RAF Akrotiri in Cyprus supported other allied air units and Iraqi ground forces during the operation in March, which targeted Islamic State fighters in the Makhmur Mountain region of northern Iraq.

“Throughout the 10-day operation, the RAF used 42 Paveway IV bombs and 10 Storm Shadow cruise missiles [over] multiple strikes. The operation builds on the success of recent years and represents a significant increase in activity from previous months,” the UK Ministry of Defence (MoD) said.

As noted by the MoD, the campaign saw the first operational use of the MBDA Storm Shadow cruise missile, which was used against underground cave systems. In March the MoD noted that the Storm Shadows were “confirmed to have struck their targets precisely”, although images seemingly of Storm Shadow parts published by an Iraqi news website appeared to indicate that at least one missile had fallen short of its intended target.

Separately, the MoD announced that an RAF General Atomics Aeronautical Systems MQ-9A Reaper unmanned aerial vehicle had struck a group of Islamic State fighters in northern Syria on 4 April using its Lockheed Martin AGM-114 Hellfire II air-to-surface missile system. “Having checked that there were no civilians nearby, the Reaper’s crew attacked the terrorists, striking the target successfully,” the MoD noted.

The Eurofighter Typhoon has launched an MBDA Storm Shadow for the first time on operations, with the...