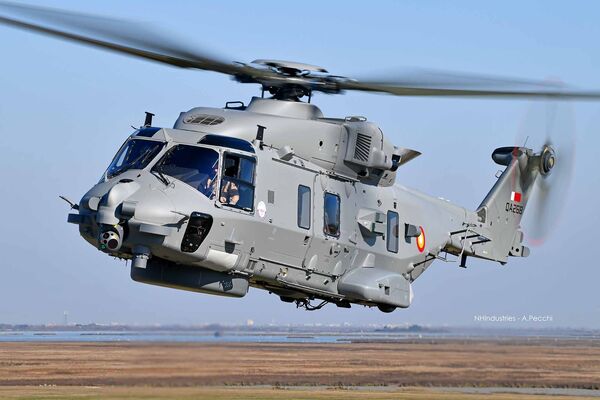 One of the first two NH90 NFH helicopters handed over to Qatar in late March. (Leonardo)

The Italian manufacturer announced the event on 7 April, saying that the first two helicopters had been delivered to the Qatar Emiri Air Force (QEAF) from its manufacturing facility in Venice Tessera.

The 12 NH90 NFHs will be used by the QEAF for maritime missions, and are part of a wider NH90 procurement for Qatar that also includes 16 Tactical Transport Helicopter (TTH) variant helicopters for overland missions. The USD2.8 billion deal for all 28 helicopters was signed in March 2018, and included the option for an additional six NFH and six TTH platforms.

Although Leonardo is the prime contractor for the overall NH90 programme for Qatar, the TTH helicopters are being built at Marignane in southern France by its NHI partner company and primary stakeholder in the consortium, Airbus Helicopters.

News of the arrival of the first NH90 NFH helicopters in Qatar comes just over three months after it was confirmed that the first NH90 TTH helicopters had been delivered, with the type appearing in the country's national day military parade on 18 December 2021.

With two NFH and two TTH helicopters having been handed over to the QEAF to date, deliveries are set to run till 2025.