Production commences on Barys 6×6 for Kazakhstan 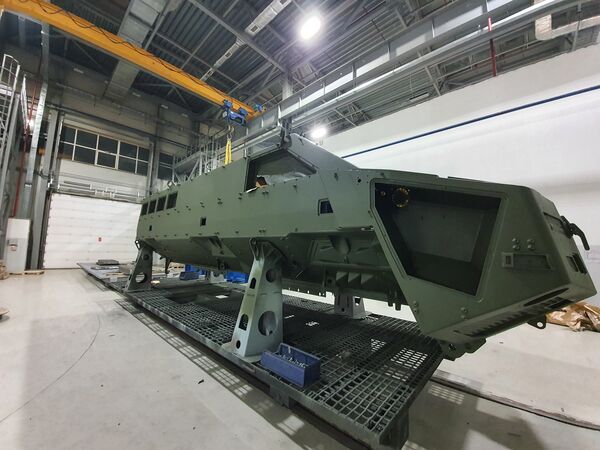 The Barys 6×6 undergoing assembly at KPE facilities in Kazakhstan. (KPE)

Kazakhstan Paramount Engineering has commenced production of the Barys 6×6 infantry combat vehicle (ICV) as part of an initial order for the Kazakh military's special forces.

The Armed Forces Special Units of the Republic of Kazakhstan have placed an initial order for three vehicles, which is expected to pave the way for a larger order of vehicles to be manufactured by the Kazakhstan Paramount Engineering joint venture between Kazpetromash and Paramount Group. Delivery of the first batch of vehicles is expected by the end of 2021.

The Barys 6×6 is a winterised variant of Paramount Group's Mbombe 6×6 IFV and is operated by two crew members. The vehicle can carry up to eight troops, with the Barys 6 being additionally equipped with fire extinguishing systems, modified hatches, an upgraded mechanical turret, and various systems for attaching and storing weapons and ammunition internally and externally.

Testing and trials of the Barys 6×6 in a special forces configuration has been under way since 2016, with the development of the special forces variant taking place as a result of testing in 2020 and 2021. KPE told Janes that the “full range of NATO STANAG 4569 certification tests” had been passed by the Mbombe 6×6, with the Barys 6×6 also undertaking additional testing, including amphibious and ballistic trials.

Other variants of the vehicle have been developed, including a standard troop carrier variant and IFV, with a mortar carrier, reconnaissance vehicle, and chemical, biological, radiological, and nuclear (CBRN) reconnaissance variants also being worked on. The company told Janes that other roles, such as command-and-control, artillery fire control, and battlefield ambulance, are also possible.