Next article
NATO's innovation generator to launch at June summit, but details unclear 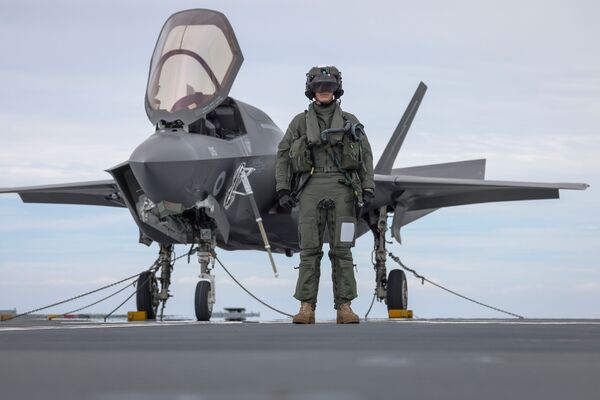 F-35B pilot, Squadron Leader Will, stands in front of his aircraft aboard Prince of Wales . (Crown Copyright)

“Operating together as part of Sea Acceptance Trials, [the F-35B arrival] is the first time a fixed-wing aircraft has landed onboard HMS Prince of Wales ,” the MoD said on 9 June. The day prior, the ministry had noted of the Apache embarkation, “The training with Prince of Wales will include qualifying new pilots in the art of deck landings and take-offs, but also ensure that ground crew from both the Army Air Corps and Royal Electrical and Mechanical Engineers can perform their aircraft handling and maintenance roles at sea.”

As with its HMS Queen Elizabeth sister ship, Prince of Wales can receive up to 36 F-35B aircraft, although in reality it is likely to operate with fewer than this, with a number of the aircraft being provided by the US Marine Corps (USMC). The Apache can be embarked to either augment the F-35B, or to provide the carrier strike capability by itself during littoral operations, as seen from HMS Ocean during the Operation ‘Ellamy' campaign against Colonel Ghaddafi's regime in Libya in 2011.

The United Kingdom is to deploy the Lockheed Martin F-35B Lightning II Joint Strike Fighter against ...

'Wake Island Avengers' arrive in UK ahead of CSG21 sailing